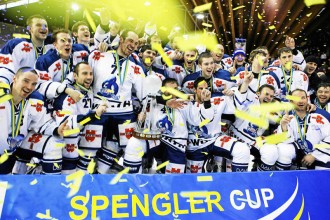 Michele Suter is Davos born and bred. She left to live in the city for a while but took the sensible decision to move back to the mountains 18 years ago. She’s an avid ice-hockey fan, and a loyal supporter of HC Davos, her local team (if you happen to bump into her make no mention of HC Zürich, it won’t go down well).

She’s also a keen golfer, and had the privilege of playing 18 holes in our home town of Edinburgh when she came to visit last year. Being from the mountains though, she is also a keen skier, so read on if you want to hear her tips on what to do on a Davos skiing holiday.

How long have you lived in the resort?
18 years

What is your favourite thing about the resort?
There is town & nature - all in one. It’s great for sports all year round, but especially winter, as well as culture & entertainment. Very high quality of life!

Where’s your favourite place to eat on mountain?
Chalet Güggel at Jakobshorn

Where would you ski on a powder day?
Pischa - one of Switzerland's largest and sunniest freeride-area. There are marked runs, protected against alpine dangers, it’s something of a fantastic deep snow pardiese.

What is your favourite run in the ski area?
It’s in Parsenn - the Weissfluhgipfel - Davos Wolfgang, black run via Meierhoftäli

If you were to spend a full day treating yourself, what would you do?
Ski in the Parsenn area, lunch at panorama Restaurant Weissfluhgipfel, ski down longest run to Küblis (12 km), back to Davos Klosters by train. Wellness at Hotel, early evening dinner in one of the Restaurants/Bars near the ice stadium, ice hockey match from HC Davos, night life in one of the many bars (probably Ex-Bar, Pöstli Club or Rotliechli – maybe all three!).

Davos Klosters is the only resort in Switzerland that offers live Ice hockey at top level. The HC Davos [www.hcd.ch] (Hockey Club Davos) plays in the Swiss top league and has been Swiss Champion for 29 times, two years ago again. All other top Swiss teams play in the major cities such as Zurich and Bern. The ice stadium is one of Switzerland's nicest with seats for. 6'700 spectators. If you want to go (and you really should!) The Hotels can organise tickets during Spengler Cup time (Int. Ice Hockey tournament during Christmas/New Year) and maybe the play-off finals - there are always tickets (standing and seating places) available. Generally there is a match almost every week between September and March/April, depending on if HC Davos qualify for the play-offs.

Any advice for families coming to the resort?
On Madrisa there’s the Kidsland, Family-Mountain and Sunparadise and on Pischa there is Kidsland with runs specially for families. The Wellness Centre "Eau-là-là" is popular with families too.

Where do you like to go for a few drinks after a hard day skiing?
In Davos I like the Bolgen Plaza for Après-Ski at bottom of Jakobshorn, and if I have the energy to carry on I’d go to Ex-Bar or Pöstli Club. If I finish in Klosters it would be "Gaudy's Graströchni" at the bottom of Gotschna, and then probably on to Casa Antica

Where would you take beginners if you had some to stay?
One of the many Snowsport School areas. In Davos it would be (Bolgen or Bünda, and in Klosters I’d take them to Selfranga or Wiesen .

What’s your favourite piece of resort related trivia?
The 110km of cross-country skiing trails is where the Swiss athletes train