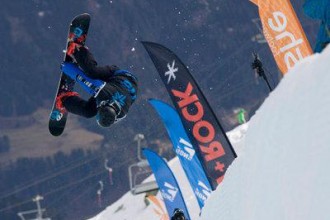 Our Insider in Laax is UK Pro Snowboarder and Team GB member, Dan Breen. He has been snowboarding for over 10 years, and rides for Salomon Snowboards, Bonfire Clothing, Electric Vision and Forecefield protection. In his own words, his snowboarding plans for the future are “to get radical in and around as many people as possible”. We’re not entirely sure what that means, but we do know that as a well know snowboarder on the scene, he’s as good a person as any to give us the low down on one of Europe’s premier freestyle skiing and snowboarding holiday destinations.

How long have you lived/spent in Laax?
Over the years I've spent many, many months in Laax

What is your favourite thing about the resort?
It's just about perfect! It has one of, if not the best park and pipe in Europe. There are miles and miles of differing terrain to burn around and the bars are ideally situated for an immediate beer at the end of the day.

Where’s your favourite place to eat on mountain?
On the mountain, it'd probably be the Crap Sogn Gion restaurant, or the Cafe No Name by the pipe.

And where’s the best food in town?
The noodle bar without a doubt. The Hotel Laaxerhof does a good steak, but I've never been able to afford one!

Where would you ski on a powder day?
All over! The trees below the slopestyle park on a bad light day, or if the sun's shining head over towards the glacier or La Siala.

What is your favourite run in the ski area?
The Home Run from the Cafe No Name back to the resort. You can charge it at the end of the day or use it for infinite little hits all the way to the bottom.

If you were to spend a full day treating yourself, what would you do?
I'd probably ride for as long as possible before my legs gave out, making sure I got a good lunch at the Crap Sogn Gion restaurant. Then head off the mountain for a swim at the pool in Laax or just kick back until it's time to head out for some noodles and beer.

Where do you like to go for a few drinks after a hard day riding?
It depends, either the Crap Bar or the Indy Bar, whichever is quieter at the time. If they're both rammed, I'd head to somewhere like the Riders Palace instead.

Where would you take beginners if you had some to stay?
I'd leave em to it to be honest. I don't know many beginners, but if I did I'd tell them to stay out of my way! Haha! No there are plenty of runs all over the place, but probably advise them to stick around Crap Sogn Gion as it’s a great place to learn.

What’s your favourite piece of trivia about Laax?
I don't really know any. I know the area has pretty interesting geology, but I'm not really into my rocks.

Any parting words of wisdom?
Look at this that's opening on the 4th December 2010 - Laax Freestyle Academy's new indoor base

How much fun does that look?!?!