Beginners will be well looked after by the ski school and there are several nursery slope areas both at village level and up on the mountain, with one of the main areas at altitude at Crap Sogn Gion, reached by comfortable easy-to-ride lifts, and plenty of terrain to press on to, particularly on the wide slopes above the two main villages of Flims and Laax. Almost a third of the terrain is ranked easy with more than 60km (40 miles) of these blue runs to enjoy once you have mastered technique so you won’t get bored, and there’s also spectacular scenery to take in while you learn. 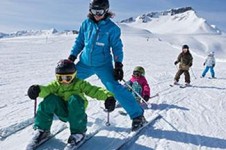 Most regard Laax as a Mecca for intermediate ability skiers with hundreds of kilometres of fast motorway cruising, mostly served by a network of high-speed, high-capacity lifts, meaning that getting around the vast area is quick and easy with few bottle necks. The big lift-served vertical means that there can be long runs, indeed some of the world’s longest, with trails touching an incredible 17km – nearly 11 miles in length. Popular runs to try out include the resort’s World Cup Descent from Crap down to Laax which competent intermediates will get down comfortably if perhaps not at the speed of the racers. 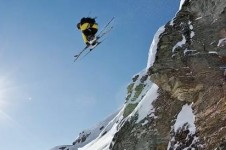 Laax is sometimes marked down as a lacklustre destination for advanced skiers, which is surprising as it offers more black graded ski runs than almost any other ski area, with 20 trails in total offering more than 80km/50 miles of tough terrain – the largest single percentage of any grade of run on the mountains (meaning the proportions of beginner and intermediate runs is smaller than advanced, very unusual in itself). The terrain includes ungroomed freeride runs which are good when the snow is fresh but more challenging once it has been lying a few days or weeks without a top up. The toughest on piste run is generally agreed to be the 4.8km (three mile) long run number 65, but there are greater challenges off piste with the La Siala and Cassons sectors particularly popular. Excursions to nearby Arosa and Davos are also popular. 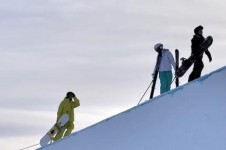 Laax is one of the world’s leading destinations for freestyle skiers and boarders, staging major international competitions each year, including the Brits festival each Spring, which sees the UK’s best skiers and boarders competing. The resort was one of the first in Europe to embrace freestyle skiing and snowboarding and at its Laax base seems to have the culture in its blood.

There are four snow parks, Noname, Plaun, Beginner and Vorab Park boasting Europe’s largest superpipe, a pro-line of three big kickers, 17m, 19m and 20m, and a host of different features to suit skiers and snowboarders of all abilities. If you love rails Noname is the park for you with 16 features for you to jib till your heart’s content and the beginner’s park is great for those of you just staring out in the freestyle scene. 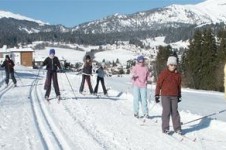 Cross country skiing is popular in the area and there are 56km of trails linking the villages of Flims, Laax and Falera as well as nearby Trin and Sagogn. Most of these tracks are down in the valley between 750 and 1550m in altitude, so offer spectacular views from varied terrain through meadows and woodland, but lack the snow-surety of the high Alpine trails. Six kilometres of the trails are floodlit for night skiing and in the unlikely event that you arrive with your dog, there’s a kilometre long section where you can ski together!

Flims Laax is a very snow sure destination thanks to high altitude slopes crowned by the Vorab Glacier above 3000m and much of the terrain below that is above 2000m. This allows the resort to open from mid-November (one of the earliest resorts in the world to open each winter), through to the following spring.

There are a number of south facing runs, but with more than 200 snow cannons covering about a quarter of the slopes, including most of the important runs, snow cover is rarely an issue.