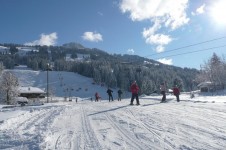 Whether or not Gstaad is a good choice for you as a first timer depends to a great extent on what you might want from a winter sports holiday. For the traditional experience – pretty villages, wooden chalets, spectacular scenery, ancient mountain farms converted in to atmospheric mountain restaurants for a steaming mug of hot chocolate or gluhwein, with a little train line linking it all – you can’t find better than Gstaad. You can’t get better tuition either and there are some long established, first rate beginner areas by the village at the base of the Wispile. What Gstaad, like many other ski resorts with a long history before winter sports, can’t quite offer is the complete convenience of the modern purpose-built-for-skiing altitude resorts where everything you need is a few steps from your accommodation. In those cases the scenery may still be good but the rest of the experience is rather soul-less and has a motorway service station feel – but if you are only interested in learning to ski, it could be a better option. 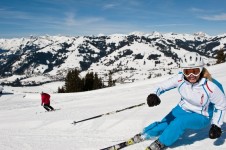 The 250km of piste on Gstaad’s lift pass divides up in to no less than 12 separate ski areas, ranging from single hills with one drag lifts to larger sectors with over 100km of runs. These each have the village name and the ski hill name so it can begin to sound very complicated and confused on paper, but in reality it is in fact fairly straight forward. You jump on a train at Gstaad and either head West in to the French speaking area or East in to the German-speaking domain (it’s on the border of the Swiss language barrier) and you have a different ski area at every train station, all on your pass. So it’s a bit like a chocolate box of ski areas, you take your choice depending on your preferred flavour of the day!

The largest single area is above five villages, ‘Schönried - Saanenmöser - Zweisimmen - St. Stephan Rinderberg’ and take in four mountain areas all inter-connected to give 105km of wonderful intermediate level terrain. Closest to Gstaad itself (no train ride required) is the sunny Eggli mountain and the La Videmanette - Rougemont pistes which add up to 50km of runs with a 1200m vertical. The third well known choice is Glacier 3000 on the road over to Diablerets (inclusive bus link) which has a fantastic 10km descent over 1600 vertical metres – the longest in this part of Switzerland. And the list goes on with another eight or nine smaller areas to enjoy – often you can have them virtually to yourself for the day if you’re visiting midweek outside holiday periods. 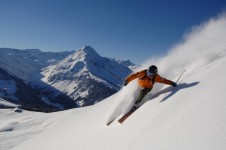 Gstaad’s huge ski area is fragmented in to numerous different sectors, many of which have their own challenges for advanced skiers to enjoy. Altogether you’ll find nearly a dozen black runs adding up to some 40km (25 miles) of tough groomed terrain, with lots of classic off piste besides. Closest to the resort itself La Videmanette is the local’s favourite for steep terrain and the most demanding pistes around the limestone pillar of "le Rubli".

Glacier 3000 has a particularly strong reputation for its off piste opportunities with incredible descents approaching 2,000 vertical metres possible. ‘Freeride Days’ (http://www.freeridedays.ch) are staged there each Spring to highlight the vast array of opportunities that ski schools and mountain guides can lead you to in comparative safety.

Heli-skiing is also popular for the wealthy in the area with five separate landing spots in the surrounding mountains. 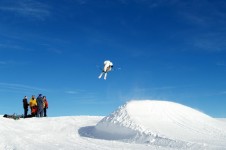 Gstaad is big on boarding with four separate terrain parks spread around the area along with other freestyle attractions. The resort’s network of high speed gondola and chairlifts make getting back up the slopes fast and easy too. So it’s no surprise it has been voted among the best in Switzerland and stages several big boarding events each winter. Among the options the Vanillaz Park located on Saanerslochgrat above Saanenmöser has its own website at http://www.vanillaz.com and a good range of features including various kickers, an A-Frame Box, kinked box, wall ride and, depending on snow conditions, a quarter pipe and 18m kicker are built. There’s also a mini park with mini kickers, wave slope, mini rails and boxes. The terrain park at Glacier 3000 has the benefit of altitude to ensure an eight month season from October to May and it is particularly popular in the October to December and April-May periods when most other resorts lack the snow to build terrain features or it has melted away in the spring. There are other parks at Rinderberg above Zweisimmen and at La Braye above Château d'Oex as well as a ski cross course at Rinderberg too. 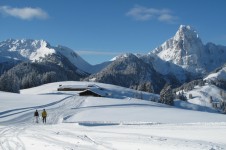 There are more than 130km of cross country tracks laid out around Gstaad, it’s a very popular activity here. These divide in to more than 20 separate loops, mostly 2-5km in length, that encompass all kind of terrain from pretty river-side meadows, trails through woodland to a high altitude loop open year round up on the glacier. Some tracks are designed for skating style, some for classic, but most for both. The longest trail locally is a 7km easy blue route to nearby Gsteig. Starting at the Restaurant Chlösterli the trail continues through Feutersoey, then on across the Saali to Gsteig. Bus connections back are available if required. Cross country ski schools and rentals are available in resort. Gstaad’s website has exceptionally detailed information on all the different loops including their current status, full practical information on their routes and so on – click on ‘Winter Activities’ for the Cross Country skiing link.

Gstaad resort itself is not particularly high. however most of the ski areas have some shaded north facing slopes and are relatively snow sure.

There is also the option of Glacier 3000, named after its height, which has a year-round snow field and is always a fail-safe destination in the event that a mild spell limits the skiing at the other areas.