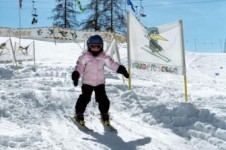 Beginners in Klosters traditionally learn to ski at one of the three areas of nursery slopes by the village. If they do not have snow cover when you visit there are more beginner runs that can be used up on Madrisa, accessed by easy to ride gondolas and cable cars. As Klosters is not a purpose built ski area it is of course a traditional learning experience and very different from the high-altitude centres designed to make learning a very straight forward experience with beginners slopes at a snowsure altitude a few steps from accommodation, rentals and ski school – but with the resorts lacking the character of a traditional village. So first timers need to decide which type of winter sports holiday experience they’d prefer. 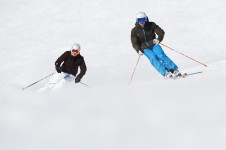 Intermediate level skiers have a vast amount of ski terrain awaiting them with more than 300km of runs to enjoy, almost all lift and ski run linked together from the village. The regional lift pass includes both the mountain lifts and train lines in the valley so you can travel 13km by rail to Davos at the start of the day if you wish - or spend longer skiing across, or just ski back. Decisions, decisions. Above Klosters itself the choice is the resort’s 'own' ski area on Madrisa, reached by gondola from Klosters Dorf which offers largely easy and intermediate runs on sunny south facing slopes above the trees, with a couple of long trails back down through the woods to the village. Across the valley the lifts from Klosters Platz access the largest ski area in the region, connecting over to Davos, with a vast selection of trails. 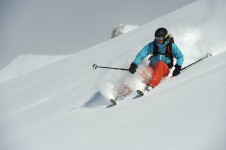 A major destination for serious skiers, thanks to a combination of classic blacks and legendary off-piste runs, including some from neighbouring Davos which are among the longest and over the greatest vertical in the world, descending over 2000 vertical metres to nearby villages where it’s possible to jump on a train and return to Klosters – all included in the regional lift pass! All in all there are over 100km of black rated piste, more than almost anywhere else, with 30% of all terrain rated difficult. Above Klosters itself the lift served vertical is more than 1200 metres with local favourite trails including the red/black Weissfluhgipfel run down to Küblis. The 'Prince Charles' cable car from Klosters Platz to Gotschnagrat, and the largest single sector of the area pass, accesses more exciting blacks and reds, or head on to Davos. 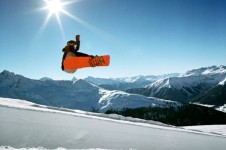 Klosters has good facilities for freestylers with its own terrain park on Madrisa and three more (as well as a superpipe and boardercross course) accessible on the full pass shared with Davos, the two together promoted as one of Europe’s leading snowboarding destinations. As well as the freestyle parks there are huge freeride opportunities throughout the region. The only real issue for boarders in the region is that while many of the key access lifts are gondolas and cable cars, most of the on-mountain lifts are T Bars drags. The biggest terrain ark is on the Jakobshorn, where the floodlit Jatz funpark at 2,500m contains super pipe, rails and kickers. 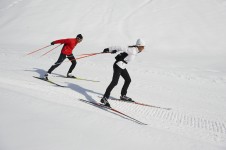 Cross country skiing is popular in and around Klosters where there’s 35km of maintained trails locally (some linking to other routes further afield) that are suitable for either classic or skating style skiing. Most of the runs, which are of variable levels of difficulty, are largely located between the village and neighbouring Serneus. Along with delightful scenery, there are some wonderful restaurants by the tracks where you can take a break for a hot drink and perhaps a cake. One of the trails, 3km long linking the Vereina Valley and Novai Alp, is floodlit for evening use. Rentals and tuition are available in resort.

The huge lift served vertical above Klosters is thanks in part to the high altitude, snow sure ski slopes reaching more than 2,000 vertical metres above the village and the fact that the traditional village itself is quite low by modern ski area standards.

With ski slopes – including beginner runs – high above accessed by cable car, lack of skiing at Klosters is almost never a problem and the season usually lasts in to May.