There are a dozen restaurants to choose from up on Saas Fee’s slopes. The Mittelallalin (+41 (0)27 957 17 71) deserves a visit as it is the world’s highest revolving restaurant, with your meal arriving, hopefully timed perfectly, so that you get through 360 degrees as you work your way through three courses: it’s at the top of the metro Alpine underground funicular.

Elsewhere it’s the normal choice between large self-service cafeterias and smaller, more intimate wooden chalet style options. The Längfluh (+41 (0)27 957 21 32) has some of the best views on the mountain to go with your meal and the Gletschergrotte (+41 (0)27 957 21 60; gletschergrotte.ch) has some of the most highly rated food and service on the mountain.

With more than 40 restaurants to choose from, it would be hard to go hungry in Saas Fee.

The majority are hotel restaurants where you can expect to find hearty mountain cuisine involving plenty of Swiss cheese and beef. The Steakhouse Chüestall (+41 (0)27 958 91 60) or the Carl Zuckmayer Stube (+41 (0)27 957 21 75) are good for this type of meal and there are several dozen others.

Saas-Fee has a small selection of food shops providing both the basics and local regional delicacies.

There’s a butcher, a good bakers – the famous Confiserie Imseng (+41 (0)27 958 12 58, the Cabane du Fromage – which has a fabulous selection of regional cheeses – and a small supermarket. 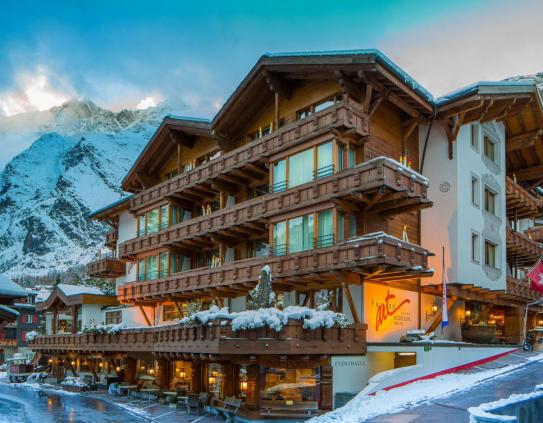 Accommodation From £309 per night
Arriving on Wednesday 1st December 2021, and staying for 7 nights