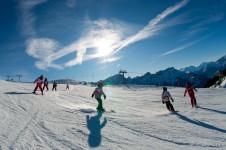 Villars is a good choice for beginner skiers with a relaxed atmosphere, a choice of highly-regarded ski schools (the friendly competition between them helping to keep standards high) and generally reasonable prices. It’s also nice to start your skiing career in one of the world’s classic resorts, when many other famous ski centres are hard to recommend for first timers, being dominated by hardcore skiers seeking extreme terrain and less concerned about high prices and inconvenient facilities.

Villars does lack the utter convenience of some purpose-built resorts which have nursery slopes a few steps from your accommodation, but the 20 minute train ride up to the gentle sunny beginner slopes on the plateau at Bretaye (1800m) has a wonderful timelessness to it, plus the views en route are great. When snow is good down at village level there are also nursery slopes just behind the railway station too. 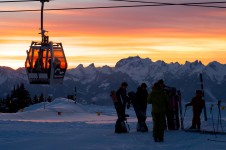 A true intermediate’s paradise, particularly since the construction of a near horizontal chair lift just over a decade ago formed the link to the slopes of neighbour Les Diablerets, thus creating a combined area of 120km of mostly easy to moderate intermediate skiing, with pistes up to 5km long locally. You can however access a trail nearly triple that in length, one of the world’s longest in fact, down from the Diablerets glacier, but it is quite a trek to get there (although perfectly feasible). To be safe though, allow a full day for this adventure.

The great thing is that almost all of the runs are included in the Alpes Vaudoises Pass, which covers 220km of runs including those at other nearby resorts including Les Mosses and Leysin and much of the transport between them. Purchasers of passes for 6 days or more are entitled to ski on more than 1000km more piste, although whether you’d ever get the chance to do so unless you’re there for a fortnight or more is a moot point. The 250km of pistes around Gstaad and the 650km of the Portes du Soleil that crosses the border in to France are on the pass though, along with more Swiss resorts including Crans Montana, Grimentz and half a dozen others.

Villars does not have the reputation of Chamonix or Verbier for its extreme skiing but none-the-less there are plenty of challenges on and off the piste with eight black runs on the circuit, the toughest arguably the mile long Bouquetins descent which has an average pitch of 32%.

The Mountain Guides Office (Villars Expérience, Rue Centrale; +41 (0)24 495 41 38; http://www.villars-experience.ch) will take you to the best off piste skiing available according to the conditions at the time of your visit, and also offer ski touring and heliskiing. 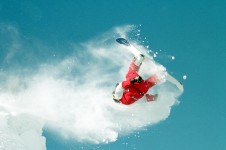 Villars has a strong reputation with boarders and freestyle skiers. In particular the resort has invested heavily in terrain parks with three to choose from in the ski area, but there’s also a great choice of schools offering tuition for all standards and in all disciplines from beginners to pro.

The only real downside is that half of the 54 lifts in the region are T Bars, but if you want to avoid them its largely possible to do so by riding the high capacity chairs and gondolas that provide access to most points anyway.

The closest snow park is at Bretaye above the resort with more distant options at the Glacier des Diablerets (guaranteed to be open all season long) and at Isenau above neighbouring les Diablerets. Regional, national and international competitions are staged regularly. 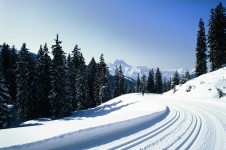 Cross-country skiing is popular around Villars and there is some particularly pretty, sometimes stunning scenery here to make it all the more enjoyable. There are 50km of trails for both classic and skating styles extending as far as Gryon as well as a high altitude loop up on the Diablerets glacier.

Departure points for the different tracks, which are suited to all ability levels, include the Col de la Croix road, des Frasses (above Barboleuse), des Chaux, de Cergnement or Bretaye. Most routes have a number of cafes and restaurants where you can stop for refreshments. To use the tracks you do need to buy a pass from the Swiss Ski school at a cost of 10 Francs for a day or 35 Francs for a week.

Villars is a traditional resort whose slopes have stood the test of time, proving their snow-surety for more than 75 seasons now.

Snowmaking covers key runs and if it is a bad snow year there’s access to Glacier 3000 near lift-linked Les Diablerets, with its snowfield normally open from October to June.