When you take a Zermatt ski holiday you’ll find it is one of the world’s top resorts in more ways than one. With lifts reaching nearly 3,900m above sea level, they rise higher than any other resort in Europe and open up the planet’s second biggest lift served vertical of nearly 2400m. That great altitude allows for descents of up to 21km (13 miles), again among the world’s longest, and for Zermatt uniquely to offer snow sports 365 days a year on its glacier ski slopes.

Then there is the resort itself, built in the attractive Swiss chalet style and dominated by the iconic Matterhorn peak. It is largely free of fuel-burning cars and commercial vehicles but its narrow streets are still busy with thousands of visitors and dozens of electric vehicles built in the resort and operated by hotels and other businesses. Zermatt is now one of the world’s top ten most popular ski resorts attracting two million visitors annually, staying in nearly 120 hotels – a third of them rated four or five star, so there’s a high standard of ski accommodation. Hundreds of shops and restaurants serve the many visitors.

The ski area itself is one of the world’s biggest too, with three main areas above Zermatt itself, connected to one another, at least partially, and then over the Italian border to the Aosta Valley resorts of Cervinia and Valtournenche. Zermatt’s ‘Matterhorn Ski Paradise’ lift pass which covers the full area, one of the world’s largest lift-linked regions, is also one of Europe’s most expensive lift passes.

However a more affordable Zermatt-only lift pass still covers half the area which may well be enough for you anyway, and it should also be noted that children don’t pay for lift tickets at all until age 10 (compared to from age 4 – 6 at most resorts), so families with younger children aged between five and nine may find Zermatt’s ski pass works out cheaper for them, overall.

Another option for saving money is to check out our deals page which has the latest offers and prices on it. 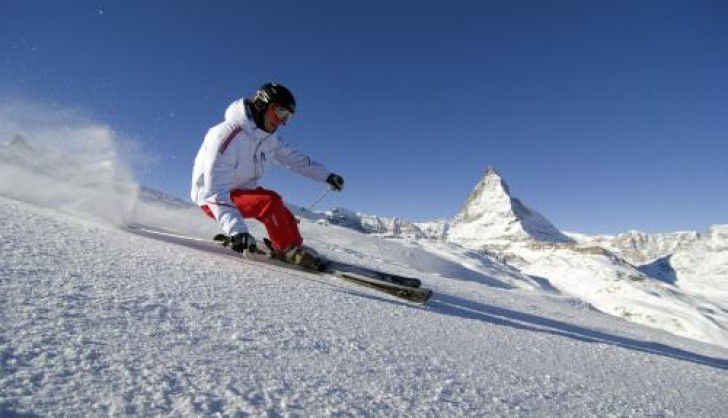 Long sunny days spent on quiet slopes - April is a fantastic time to head to the Alps.

Want to find a ski hotel with a bit of history? Here's our guide to some of our oldest and most loved ski accommodation.