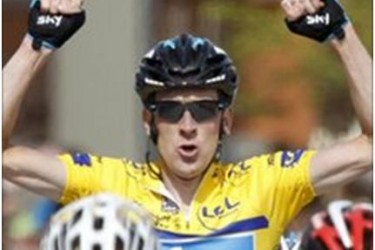 This is a massive achievement for the Londoner who will be taking momentum from this win into the Tour de France that starts at the end of the month.

Wiggins struggled in the French alpine sections last year but managed this year to up his game and control the race throughout the tougher mountain stages, sending clear signals of his readiness for the Tour de France to his closest competitors Alberto Contador of Spain and Luxembourg's Andy Schleck.

Despite claiming not to be 100%, Wiggins is the third Briton ever to win the Tour de France warm up stage and until now the last British cyclist to take gold at the Criterium du Dauphin was in Robert Millar in 1990.

All the Best Brad!