Following on from the redevelopment of the Solaise area, Val d'Isere is embarking on an exciting new development project – Le Coin de Val – which will transform the centre of the resort.

Claimed to be 'the most ambitious building project undertaken in the Alps in a generation' (even bigger than the construction of Arc 1950 14 years ago), the £170 million joint project between Val d'Isere's town hall and local architect Jean-Charles Covarel is the demolition and reconstruction of a giant triangle in the centre of the resort. One of main aims of the development is to connect the slopes to the heart of town – a new piste will take skiers and boarders back to the resort past Bananas restaurant and an underground moving walkway will transport people from the centre of town up to the Olympique and Solaise gondolas.

Val d'Isere is one of the most popular resorts in the world and has steadily seen its visitors increase over recent seasons – this trend is expected to continue so the project will also include two new 3 or 4 star hotels along with two new apartment complexes. This will add 900 tourist beds, bringing the resort's total to 25,760.

In addition, Le Coin de Val will add a range of new shops, bars and restaurants to the resort. Plus, a new arrivals centre will be available to visitors on the Avenue Olympique, offering a welcome desk, children's crèche and covered bus station. 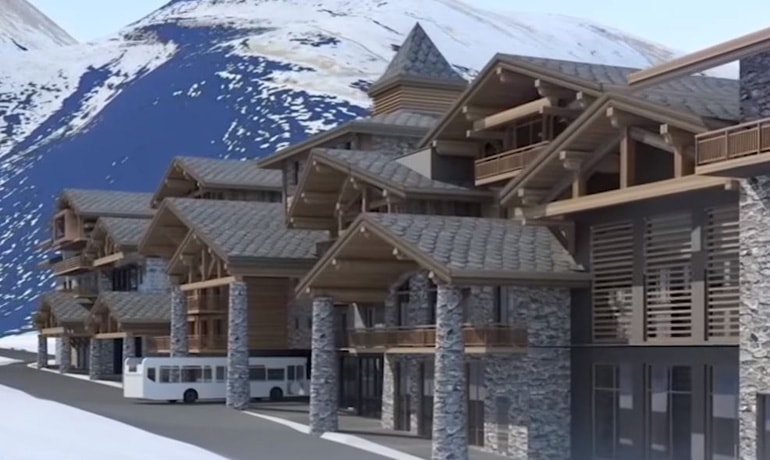 There will be a new covered bus station on the Avenue Olympique.

Environmental concerns are a key aspect of the work, with clear efforts being made to reduce energy consumption – rainwater and snowmelt will be used in the buildings' sanitation system and geothermal energy will heat the hotel rooms and the apartments. Environmental studies into the effects of the development will be carried out this winter before the final building permits are granted next spring.

Where will the development site be located?

The village redevelopment covers 22,000 square metres and replaces a range of 30-year-old buildings in the heart of the resort. It stretches for around 250 metres along the Avenue Olympique from the main bus station, heading towards La Daille. The apex of the triangle is located approximately at the current site of well-known apres haunt Dick's Tea Bar. Dick's and another popular watering hole Le Petit Danois are among the many businesses to be relocated as a result of the development.

When will the project be completed?

Work on Le Coin de Val will be carried out in phases, to avoid too much disruption to visitors during the winter season. The initial demolition work begins this autumn, and the development is scheduled for completion in 2022.

"Coming hot on the heels on their investment in the Solaise gondola, lodge and beginners' area, it’s fantastic to see Val d’Isere continuing to look to the future with the announcement of Le Coin de Val. This development will be of huge benefit to guests adding more apartments and hotels, and also re-energising a central district of Val d’Isere with new shops and restaurants. It seems Val d’Isere has a very bright future and we look forward to seeing the first phase come to life." 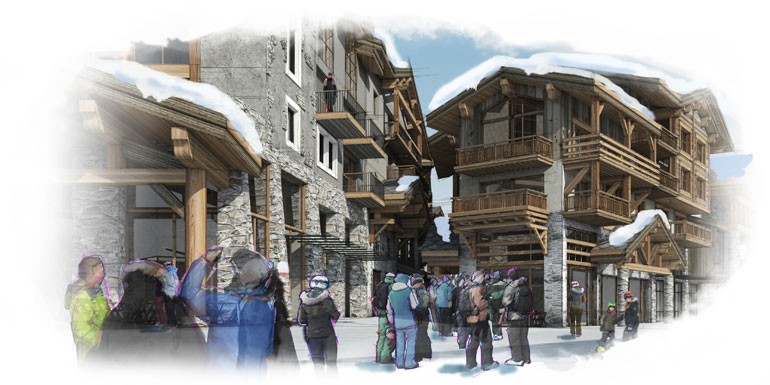 What else is new in Val d'Isere?

New boutique hotel on Solaise – the Tête de Solaise (the oldest cable car station in France) is to be transformed into the country's highest hotel, with 40 bedrooms, a restaurant and spa – the scheduled opening date is December 2018.

More snowmaking – Val d'Isere is already home to Europe's largest artificial snowmaking facility, and it's set to get bigger. The long stretch back to town from the bottom of the blue Santons run is being equipped with snow cannons to ensure cover throughout the season, improving the alternative trip home for those who wish to avoid the intimidating La Face black run.

Hotel Ormelune renovation – this lovely hotel now has an additional 10 suites and rooms to offer guests, the gym has been extended and there are three new treatment rooms in the spa.

Are you excited about Le Coin de Val? Let us know your thoughts on Val d'Isere's latest project in the comments section below!