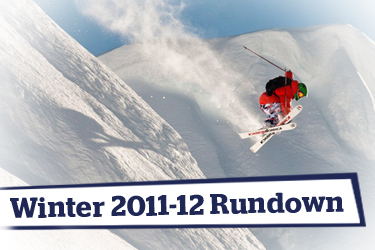 What a mixed bag we've had this Winter! It's been truly record breaking in Europe with some resorts in Switzerland reporting more snow in three weeks than they had all winter the season before. The snowy theme continued right into the spring with resorts across the French Alps receiving as much as 60cm of fresh in late April.

Check out the image below that compares Tignes on the 25th of April to the same day the season before – night and day! And here's hoping for the same again next year.

Europe received so much snow that even the ski resorts were astounded. In fact at times it was a little too much! In France we had the best year for snow in decades and many resorts in the Tarrentaise Valley – Val d’Isere, Tignes, La Plagne and Les Arcs – had to close when the huge snow storms of January named ‘Andrea’ swept through the Alps.

Resorts like Chamonix in the Northern French Alps received the most snow and still holds an impressive base of 370cm after superb late season snow.

Conditions have been fantastic in Canada this year. Whistler had the best snow with over 12m since November and Banff expects to re-open as late as July 1st for Canada day after a great season.

In America things aren’t half as bad as first though after a pretty tough start to the season. The Western States like California, Washington and Wyoming have had a great end to the season with fantastic spring snow.

In complete contrast, Colorado has had one of the driest winter seasons in 40 years. However, meteorologists are saying we are to expect another snowy winter in 2012-13 as a result of a third successive La Nina year.

The cycles we’ve seen over the last few winters are very similar that which set up the snowy winters of the late 70s - La Nina, then El Nino followed by a stronger La Nina. If this is the case, we’re likely to see at least another 3 cold winters with lots of snow. Fingers crossed!

Who knows what next winter holds for us but if it’s even half as good as the winter we’ve just had we’ll be over the moon.