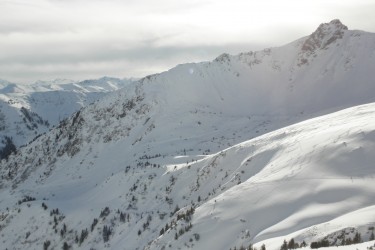 The flights had been booked months ago. But with only 2 days to go before our weekend ski trip, we still hadn’t decided which resort to go to. In search of an adventure we had taken the decision to leave it to the very last minute and see where the snow was good.

A number of places looked like they were getting snow: Solden, Ischgl and the front runner for us at the time, Mayrhofen. But a resort that we had never heard of was getting loads of the stuff – Fieberbrunn. A quick look at the piste map showed an area which was modest in size, and with further investigation we found that it is the only resort in Austria to host the Freeride World Tour, extreme skiing’s most prestigious event. We decided to take the plunge and give it a shot.

We arrived to find a small, pretty Tyrolean village, nestled between its better known neighbours of Kitzbuhel, Saalbach and Scheffau. It had clearly had plenty of snow and was basking in sunshine. We had managed to find somewhere with lots of powder and clear blue skies - we felt very smug indeed.

After a few warm up runs on the groomers we found that the lift network wasn’t quite up there with super-resort standards, but the pistes were lovely, quiet and really well maintained with lovely soft, grippy snow.

It was with the off-piste terrain that Fieberbrunn really excelled itself though. There is simply loads of it there, more than you could ever hope to ski in a full season. There’s lots of really challenging stuff, lots gentle stuff, lots of it north facing and most of it easily accessible from the lifts.

It then started to become clear to us that Fieberbrunn was no ordinary resort – half the people on the mountain had either touring bindings or ABS avalanche safety bags, and all the ski schools at the base were all billing themselves as “Freeride Experts”. Like Kicking Horse in Canada, Fieberbrunn is the sort of place where the locals live and breathe off-piste skiing.

With one eye on safety and the other on getting the most out of the ski area, we decided to get a guide for the day. Our excellent guide Stefan from S4 Snow Sports told us that he had lived in Fieberbrun all his life (which perhaps explains how inconceivably cheerful he was) and explained that Fieberbrunn is what the locals call a Schneeloch (snow hole). When it snows in the region, Fieberbrunn always gets the most he told us proudly.

We took a long traverse from the top of the Hochhörndl chairlift and ended up in a huge bowl with light fresh snow and a descent that took us below the tree line and back to the Reckmoos chair. We skied a couple of variants of this bowl before taking a new route from the top of the Reckmoos chair. After cutting underneath the lift we traversed around the face to find a steep, north facing slope through the trees with perfect snow due the shelter from the sun and wind.

After a well-deserved lunch of Tiroler Gröstl and beer, Stefan decided to pull out his trump card and take us on one of the nicest off-piste runs we’ve skied in a long time. We went right to the top, hiked for 15 minutes and traversed for a further 20, passing bowl after bowl with a few tracks in them showcasing the amount of terrain available to ski.

We eventually stopped and Stefan explained he was going to take us to the valley between Fieberbrunn and Kitzbuhel. With not a person in sight we skied down from high-mountain terrain to lower pastures, passing barns and summer farm houses closed for the winter before ending in the valley with us skiing through the forest with trees covered in snow and alongside the banks of a flowing river – it would have felt truly magical had my legs not been on fire.

Fieberbrunn has a huge amount to offer those looking to ski off-piste. With a modest lift network though, most mile-hungry skiers looking for endless pistes are likely to get a little bored. A great option would be to stay in neighbouring Ellmau or Schaffau to ski the enourmous SkiWelt area, and take day trips to Fieberbrunn for the off-piste.

We certainly plan on returning to Fiederbrunn soon, and hope that Stefan and the Schneeloch are as kind to us again.