For a skier, there are few things in the world to beat the feeling of cruising down the mountain with a spray of powder behind you and a panorama of breathtaking scenery ahead. However, even the best things in life can have their downsides, and although it takes a lot to truly spoil our fun, there are certain niggling annoyances that have definitely been sent to try us.

Ill fitting ski boots are the biggest cause of ski-related misery. If your boots don’t fit well, the discomfort can be enough to ruin your day. The most annoying thing is that they may feel fine in the rental shop but by the time you get to the top of the mountain, you can be crippled with pain. To many novice skiers, ski boots may look, and feel, like instruments of torture, but if you get them properly fitted ski boot misery will become a thing of the past. However, there are still several other things that are pretty annoying about them, such as getting them on and off and… 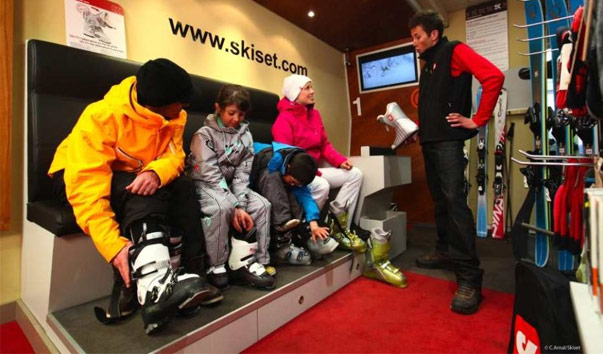 To paraphrase Nancy Sinatra, ski boots weren’t made for walking! In particular, they weren’t made for walking down stairs. More perilous than any black run you’ll do all day, will be the descent down the ridiculously steep steps to the loo in the mountain restaurant. Similarly lethal are the metal steps that you have to clunk up and, more problematically, down for the majority of gondolas and cable cars. Their serrated surface is presumably to help prevent you from slipping as you attempt to negotiate them in the slabs of plastic attached to your feet, but should they fail to serve this purpose, there’s a distinct possibility that you’ll find their teeth digging into your flesh as opposed to the hard soles of your boots. 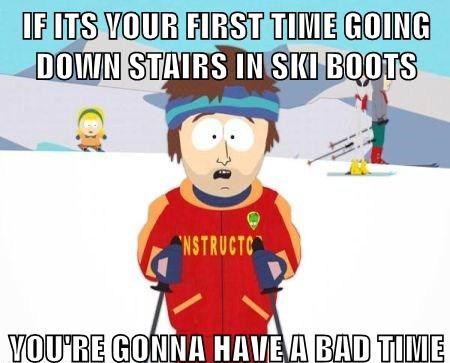 The Hospiz Alm restaurant in St. Cristoph, Austria cleverly combat the ski boot/stair issue with this amazing slide down to the toilet - just what you need after a few après ski shandys! These should most definitely be standard issue in all mountain restaurants and resort bars. 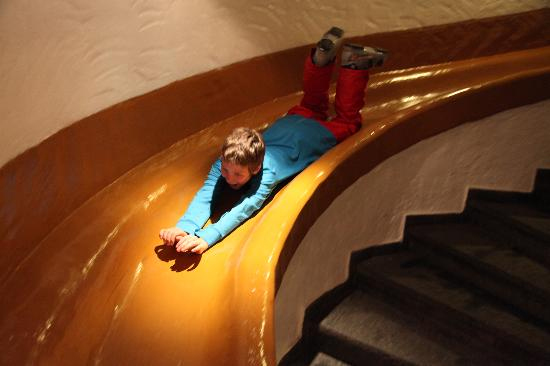 We think that snowblading is actually completely misunderstood. It's definitely is one of the coolest things to do on the mountain and you'll often find it accompanied by maximising the size of the gap between the blader's goggles and hat. Apparently shortening the length of your skis allows you to be in better control at speed, hit bigger jumps and ski steeper deeper powder. In our view it’s a no brainer and everyone should have a pair… ;-) 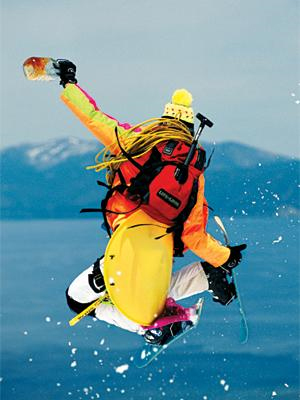 Walking in ski boots is hard enough, but when you add carrying skis, and poles, into the equation it becomes all the more challenging. Add to that carrying your partner and/or children’s skis too and it becomes a gargantuan task requiring supreme strength, balance, technique and patience. Fitting both skis together and getting them to stay that way while you transport them from A to B requires great skill. Managing this with more than one pair is a tour de force. You have to both pity and admire the bloke that you see hobbling along, crying child in tow, with several pairs of skis balanced precariously on each shoulder. 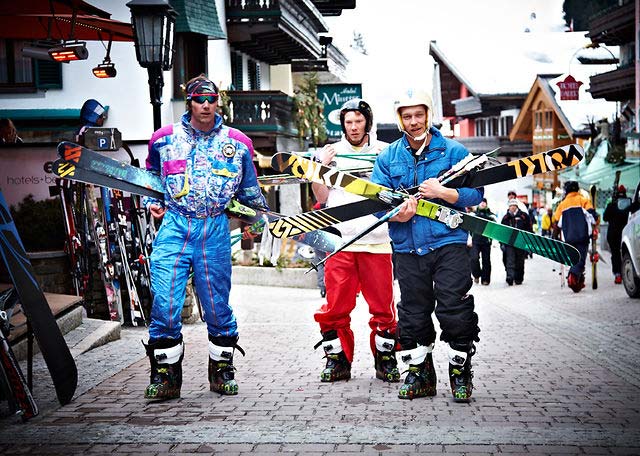 Skis can prove to be troublesome both on and off piste. More specifically, it’s your ski bindings that can make or, quite literally, break you on the slopes. If your DIN settings are too high and your bindings don’t release you from your ski when you fall, you can be in serious trouble. However, if they’re set too low and you end up being ejected mid-turn or as you land a jump, it can be at best annoying and at worst, downright dangerous. It can happen more than you think. One minute you’re carving a fast turn over choppy terrain imagining this is your big shot at GS glory, the next you’re heading towards the trees, still upright but with only one ski still attached. Lovely!

Bode Miller loses a ski and finishes the Downhill with one ski at the World Championships in 2005.

So we’ve established that a binding releasing can either be a blessing or a curse. Regardless of whether or not your ski going MIA has saved you from injury, you’ll now find yourself being left on one ski. Those who’ve mastered the dark art of monoskiing may relish this and manage to stay upright for a while, but for most, this will be short lived. If you’re lucky your runaway ski will come to a halt nearby, but all too often you’ll watch it hurtling off down the slope, praying that it comes to a stop soon before it causes some serious damage. Cue an embarrassing trudge in ski boots down the slope to retrieve your errant ski. Sod’s law dictates this will always be with an audience watching on from a very slow chairlift. Of course, that’s assuming that you’re skiing on a hard packed piste. If you’re skiing in powder when you lose your ski, you may not have the luxury of keeping it within your sights, which leads us on to another annoyance…

Now, I hesitate to make reference to deep powder snow in an article about annoyances in skiing as, for the majority of skiers, deep powder snow is the holy grail. However, for those making their first tentative turns in the deep stuff, it can be tricky. We’ve all been there. You know what to do in theory but the more you tell yourself to keep your weight centred and will yourself not to fall, the more likely it seems that you will. But it’s not the falling that’s the problem, as that’s like landing in cotton wool. It’s the getting up again that’s infuriating. Assuming you manage to find said ski buried in the quicksand-like abyss, managing to get it back on, and then standing up again, is an altogether different matter.

What if you can’t find your ski in deep snow? This is far more common than you might think and means you’ll be picking your way back down on one ski (on a powder day!) with some explaining to do to the rental shop. 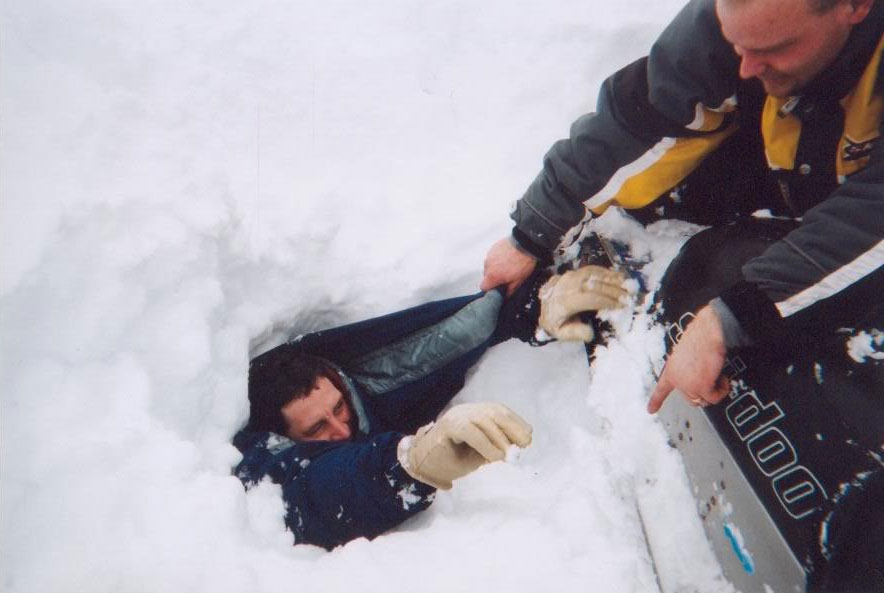 Dropping something off a chairlift

Losing a ski pole may not be as catastrophic as losing a ski, but it can still quite easily spoil your day. And as they’re only attached to you by a loop around your wrist, the chance of losing them is fairly high. They’re also pretty easy to snap, which is equally annoying. What would be even more annoying though would to be hit by one falling from a chairlift… It may seem unlikely, but next time you’re riding up a chairlift, just look at how many dropped ski poles there are. It might make you think twice about taking that oh-so-tempting sub chair line!

Ski poles aren’t the only things to be dropped from the chairlift. Gloves are another common one, and there’s surely nothing more annoying than losing one glove, especially if it means skiing to the bottom of the mountain with your hand exposed to the elements, and then having to pay top dollar for a new pair. On second thoughts, dropping your phone, iPod or camera is probably worse. There’s not much chance of you getting that back in any kind of working order, and the outlay for a replacement is considerably higher. Worse still, imagine losing your Dad... 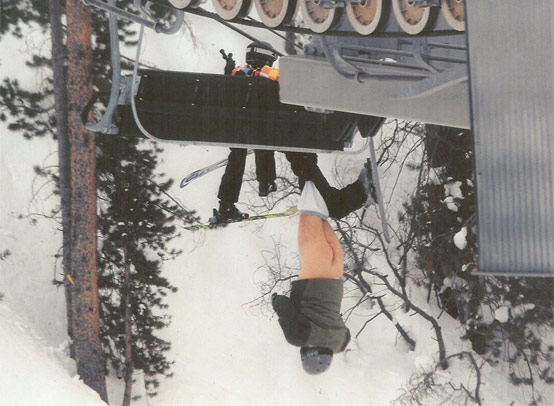 The sturdy professional looking black ones are essential kit for ski patrol, but the flimsy toy yellow ones in the hands of excitable teenagers can be torture - especially in the confined spaces of a cable car or gondola. The whole world doesn’t need to hear you shout for 10 minutes over static about where you’re meeting for lunch. Over and out! 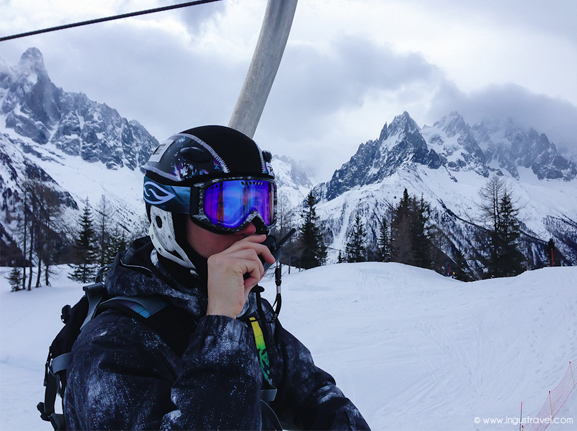 Tiny kids on skis being so damned good.

For no other reason than that they pick it up so quickly and have absolutely no fear! Who hasn’t looked down from the chairlift at a line of ski school tots snaking down the slope in perfect control and felt a twinge of embarrassment at your own efforts to negotiate the last run? I suspect most people who weren’t lucky enough to be one of those kids once upon a time. Flying down an icy mountain strapped to two planks just doesn’t come as naturally to anyone with more than a metre to fall, or old enough to understand the potential consequences. Ignorance is bliss.

So that’s our tongue in cheek top 10 pet hates for skiers. Is there anything you think we’ve missed? What gets your goat on the slopes? We’d love to hear from you – just post your comments below.