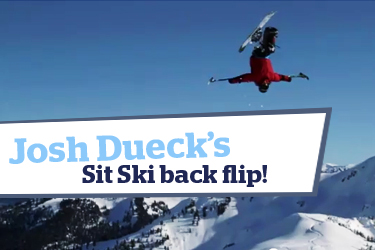 I think we posted this on our Facebook page a few months ago but on reflection it really does deserve a dedicated blog post.

Josh Dueck broke his back nearly 10 years ago in a tragic skiing accident in which he was left with no feeling in his body from the waist down.

Determined to get back on the mountain Josh was back on a Sit Ski faster than average person turns around an ACL knee injury. Josh went on to re-write the book on what was possible on a sit ski and became the first person ever to perform a back flip.

This is a short documentary on Josh and his attempt at the first ever back flip made last winter by Salomon Freeski TV.

This video is truly awesome and puts a lump in my throat every time I watch it.