The summer ski season is now well underway, and with Mother Nature depositing record snow falls on the Alps’ white peaks last winter, the glaciers should be in tip top condition for the snow junkies heading to the continent for their fix of summer snow.

Summer is a wonderful time to visit the Alps, with the fresh air, a raft of outdoor activities and stunning scenery. But as we’re all about skiing and snowboarding here at PowderBeds, here’s our guide to the top 5 ski resorts for summer skiing.

Val d’Isere is rightly known as one of the world’s premier winter sports destinations, but not everyone knows that it has its own glacier which opens for summer skiing. The Pisaillas Glacier sits above the pretty hamlet of Le Fornet, reaching a respectable altitude of 3400m.

With only 3 ski lifts it’s not the biggest glacier on the summer circuit, but what it lacks in size it makes up for with its lack of crowds. It is notably quieter than some of its summer skiing competitors, which could be why it’s such a draw for the many race teams which use the glacier as a base for their summer training sessions.

As with Val d’Isere, Zermatt is an iconic resort with a vast ski area, but for some reason is not on the radar of most recreational summer skiers. The glacier stretches up to a high 3800m, and also benefits from a good aspect so it holds the snow verywell.

With 5 ski lifts and 20km of piste, it’s not the largest but offers enough choice for a morning’s ski. There are rumours of the summer ski area linking up with neighbouring Cervinia’s glacier over the border in Italy, which if it happens with increase the size to be one of Europe’s biggest with 13 runs.

Located on the Kleine Matterhorn, skiers and snowboarders can ski in full view of the majestic Matterhorn in the morning, and then explore the stunning town and surrounding area in the afternoon. 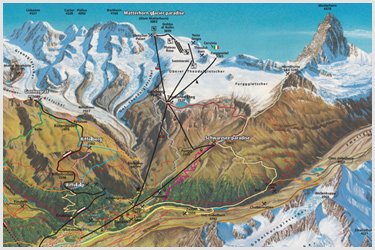 Le Grand Motte Glacier above Tignes offers a fantastic variety of terrain for a glacier, and is considerably larger than its neighbour in Val d’Isere. It is one of the only glaciers in the world with a genuine black run, and skiers can also get some turns in on red, blue and green runs. 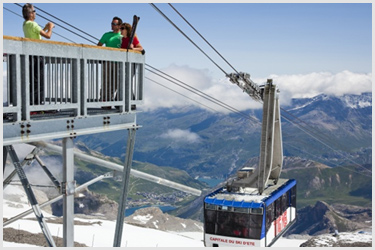 The summer ski centre has a small snow park with a small range of kickers, hits and rails, but it’s not the biggest park on the summer circuit and far from the best maintained. Tignes’ main draw for summer freestylers is the unique lakeside freestyle facility. Riders can safely learn new tricks and cool off in an adrenaline-fueled manner by boosting off 4 big kickers into the lake.

Saas-Fee is a quaint car free village surrounded by some of Switzerland’s highest peaks. It’s a popular destination in the summer for climbers, bikers and walkers, and also attracts a big number of freestyle skiers and boarders thanks to its beautifully shaped park. The pipe is one of the best known in Europe, and as a result Saas-Fee is the base of choice for the British Freeski camps.

The glacier isn’t just for riders with big pants and bigger attitude though. With its 20km of slopes it also attracts a large number of national race teams who use the glacier as a base for their summer ski training programmes.

Despite being filled with hardcore shredders and professional racers, the summer ski centre is known for having a friendly and laidback atmosphere, where recreational summer skiers are made to feel just as welcome as the pros on its 20km of well-maintained slopes. 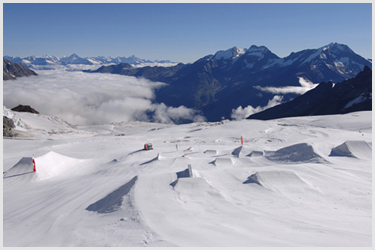 Les Deux Alpes clinches the top spot for two very simple reasons: 1) it is Europe’s biggest skiable glacier and 2) it has an enormous and impeccably run park for the freestylers and shredders.

It reaches up to 3600m with stunning views of the surrounding Oisans national park. Summer skiing is big business in Les 2 Alpes, so they have an impressive snow management programme to ensure the best possible coverage of snow at all times. 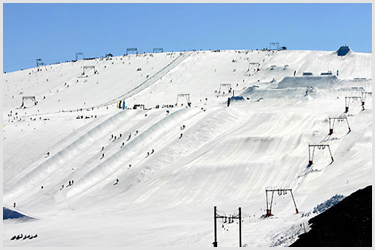 With 11 lifts and 300 acres of skiable terrain, it is a great choice for those looking to cruise and get some turns in on real snow in the summer. There is a good variety of terrain too, with a couple of red runs, some blue and some green.

We would be kidding ourselves though if we said the immense snow park isn’t the main draw. The enormous snow park deservedly earns LDA the reputation as being one of Europe’s top spots for snowboarding and freestyle skiing.

There are is a vast array of kickers, hits, rails and boxes; a beginner line, an intermediate line and a massive pro line; an airbag to practise new tricks on and; new for last year was the Olympic sized half pipe with its frighteningly big 6.5m walls. The LDA glacier is the real deal. 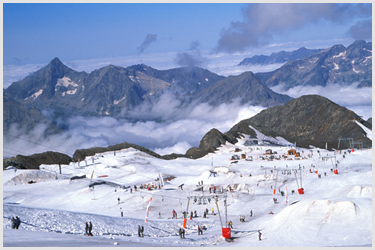