Ever been told your kids need to learn to ski before they can snowboard? Or that they can’t snowboard until they are over 8 years old? Yep, us too, but we’ve never been sure why? So we had a chat with the pros at MINT Snowboarding to find out what age is best to start strapping in and do you really need to be able to ski first?

Traditionally, advice has always been to get kids on skis first and there was a genuine case for this; until recently there has been a real lack of suitable equipment for little snowboarders out there, and we know whether learning to ski or board, ill-fitting equipment is a sure-fire way to ruin your day! Luckily Burton have solved the equipment problem by introducing new boards and bindings specially designed for mini shredders, allowing them to get started on the snow as early as 2 years old! The plastic ‘Riglet’ boards have a retractable cable handle allowing an instructor / parent to control speed, direction and tow children. They have also been designed to be simple to get on, with velcro closure boots and single strap bindings making it easy to get children age 2 and up on the snow and riding in no time at all.

The second argument we’ve often heard for waiting until kids are a bit older to get them on a board is that snowboarding requires more muscle development that younger kids (under age 8) don’t have yet, but is that true? Tammy from MINT tells us;

‘Snowboarding is a very natural stance for small kids and I believe they are less at risk of injury compared to on skis (no chance of twisting legs etc) so there is no issue with young kids not having the physical strength to snowboard. It is just a case of standing up as usual on the board to go straight. To use the edges, this comes as and when they are ready - generally by age 3 all kids are able to start using the heel edge. The toe edge is as much a case of being mentally ready as well as physically - as soon as they are ready to understand the advantages of turning they will make this step.’

Each child will develop and progress at their own pace, both in their muscular skeletal development and progression on the slopes, so the most important factor is really making sure they’ll enjoy themselves. To ensure that happens, Tammy has a few top tips for kids of any age who are hitting the slopes for the first time whether skiing or boarding;

Give kids the choice - whether they want to ski or snowboard doesn't matter as long as they are enjoying it.

Don't try and get them to learn both - trying to pick up both skiing and boarding at the same time will only be confusing and dramatically reduce progression in either one or both sports.

Give them slope time in small doses - keep it short and sweet and don't tire them out (hot chocolate breaks always go down well!).

Don’t teach your kids yourself – it’s well worth the investment in lessons from an expert to speed up progression, keep them safe, make sure they have fun and  (most of all) avoid any family arguments!

Give kids an emergency snack - something to carry in their pockets (PowderBeds tip… treat-size chocolate bars or boxes of raisins provide a pocket-friendly sugar hit).

Mittens not gloves – they are way easier to get on and off, and usually warmer too. 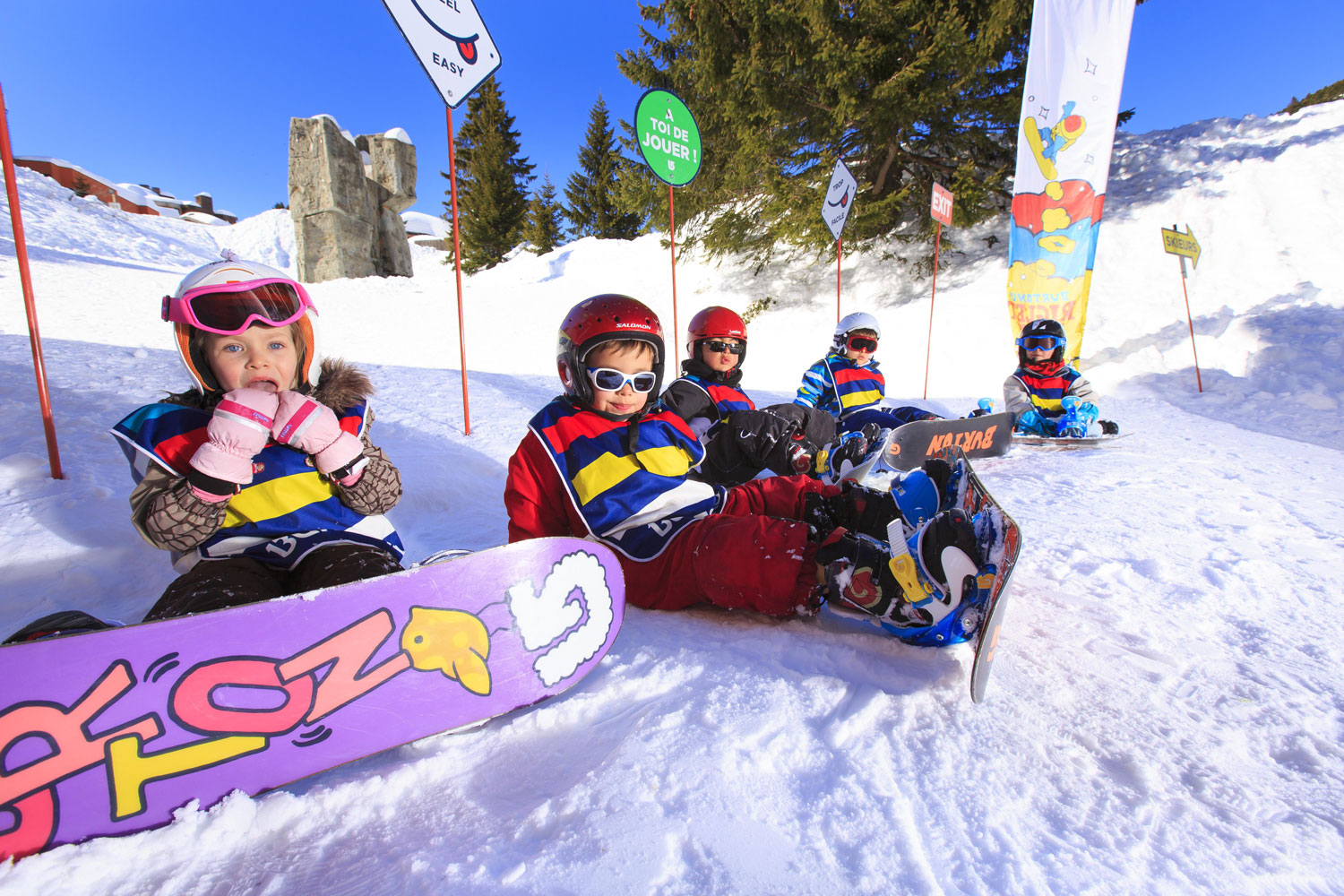 So now that we’ve established that we can get kids started on a snowboard as young as age 2 as long as they are ready, the questions is, where is best for them to learn?

There are many fantastic resort to learn to snowboard in, both in Europe and North America, but here are some of our favourites:

Top Resorts to Learn to Snowboard

Avoriaz – Firmly at the top of our list, Burton have waved their magic wand over Avoriaz and, along with being close to Geneva, this super family friendly resort is also home to its very own Burton Riglet park and shops in town stock Riglet equipment, which is available to hire. What’s more, our friends at MINT Snowboarding have a base here and are on hand to offer lessons to kids from age 2 up. Once they’re up and riding there's the whole Portes du Soleil area to explore, which has long been a favourite area with snowboarders.

Whistler – A world-class resort and heaven for kids, the ski and snowboard schools in North America have been ahead of the curve and getting younger kids on snowboards for a while. They also have a Burton Riglet park and once the kids are up and running they can pretty much get round the whole mountain on green and blue runs, so you won’t be confined to a beginner area. Kids can join group snowboard lessons on Whistler mountain from age 4 and private lesson from 2.5yrs old.

Les Arcs – Massively family friendly, Les Arcs offers plenty of lifts which are free to use for beginners to access some easy pistes to get started on. After that there is a great selection of mellow green and blue runs to start to explore, many of them are nice and wide which makes a difference when you’re learning to turn. Check out Mille 8 too – a fantastic adventure zone for kids to ride through or check it out at the end of the day and enjoy the swimming pool or sledging.In terms of lessons, New Generation offer private snowboard lessons for kids age 5 and up and group lessons (not specifically for kids) from age 10. Kids can join group lessons with Spirit at Arc 1950 from age 8 and with the ESF from age 8 during school holidays and 10 the rest of the season.

La Rosiere – Near Les Arcs, this lesser known resort is blessed with quieter pistes and has a charming resort centre. Kids can join Evolution 2 group lessons from age 8 and ESF lessons from age 8 during school holidays and age 10 during off-peak weeks. Once you get some more experience you can venture over to the steeper Italian side of the mountain but it's great for first timers as around 80% of La Rosiere terrain is suitable for beginners so there is plenty of space to progress.

Alpe d’Huez – Known as one of the sunniest resort in the Alps, Alpe d’Huez is fantastic for kids learning as its south facing slopes usually stops kids from getting too cold and the beginner area just above the resort has a great selection of green runs which are easily accessible from a series of lifts available with a cheaper beginner area pass. The local ESF has several meeting point around the base of the resort and a fantastic play garden for kids to learn in. As with all ESF bases, kids snowboard lessons start from age 10 during off peak weeks and age 8 during the school holidays. 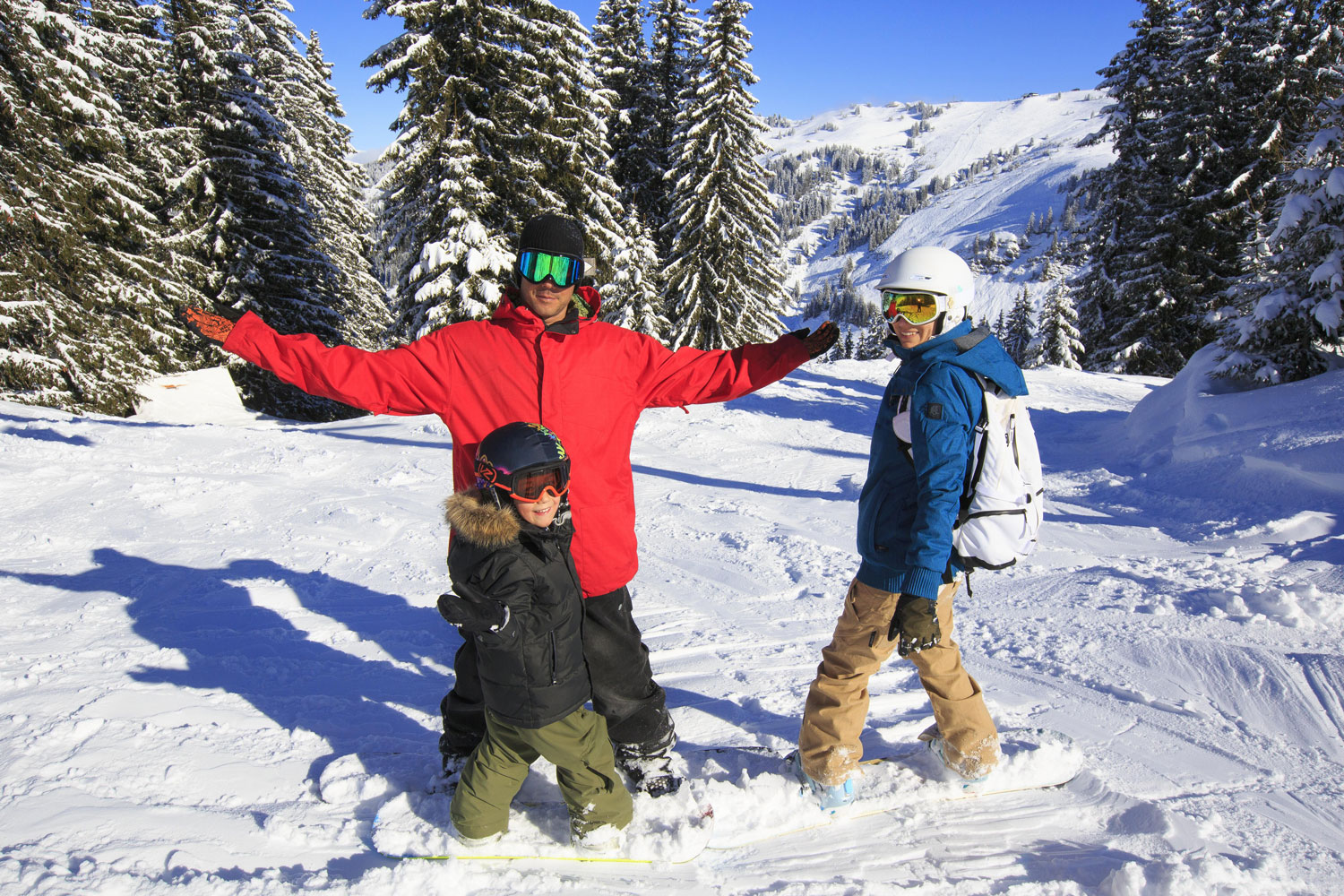 Have your kids started shredding yet? Let us know when they first got on snow in the comments below or better yet send us a picture!