The season’s been incredible so far, but with long-range weather forecasts predicting fantastic conditions well into March and April, there’s one question we all want answered: where’s the best snow? To make it easier for you to plan your spring sun ski breaks, here’s a quick summary of where’s got snow now, and where it’s going to be over the next couple of weeks.

With last week’s clear blue skies continuing through the weekend and even more sunshine forecast for this week, it looks as if many resorts are going to be offering some pretty amazing conditions over the next few days.

Despite the strong sunshine, pistes remain in excellent condition, particularly on higher slopes. Avoriaz has currently got 290cm on upper slopes and 250cm on lower slopes, with 33 out of 34 lifts open, allowing for a huge amount of fantastic skiing on well-groomed pistes.

High up in the great snow tables, Flaine has a massive 365cm on its upper slopes and 94cm lower down, whereas Tignes has maintained an impressive 280cm at the top and 135cm on its home runs.

Val d’Isere’s expecting a considerable amount of new snow this week, which will temporarily put an end to the glorious weather they’ve been having, but should make way for some excellent skiing the following week! Snow depths are currently at 290cm on upper slopes and 145cm on lower slopes. 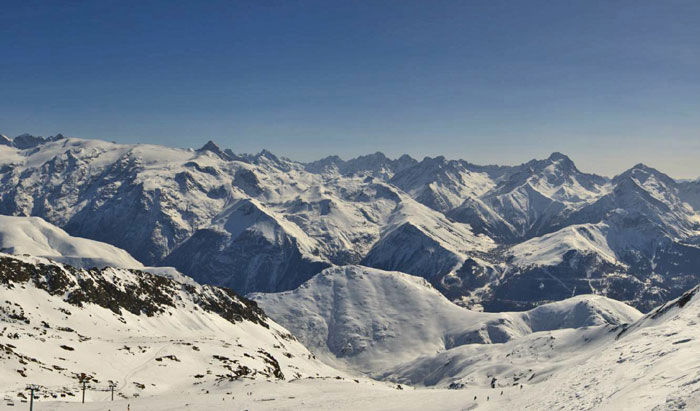 Alpe d’Huez has been offering similarly fabulous conditions, with 380cm of snow at the top and 188cm on the lower slopes. They’re predicting a few light dustings this week and a heavy snowfall next Monday.

Although the freeze-thaw conditions in some lower villages have had people hoping for a few good snowfalls, temperatures are set to drop again at the end of this week. With new snow predicted in the Portes du Soleil, the Three Valleys and the Espace Killy, it certainly looks as if the season’s got a lot more incredible skiing in store.