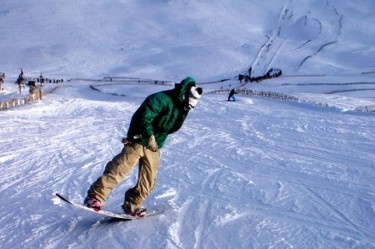 As temperatures plummeted as low as -18c and as much as 40cm of snow dumped on Scotland and much of Britain, an air of excitement overcame PowderBeds HQ in Edinburgh as we watched the snow pile up on cars outside the office. After much chat and several cups of tea, plans were made to ensure we took full advantage of this extraordinary and unexpected winter weather. Here's what we got up to with 2 weeks of heavy snow...

With almost a foot of fresh powder in Edinburgh’s city centre there was only one thing for it - an after work hike up Carlton Hill to the City Observatory and fresh tracks through beautiful dry and light powder, all the way though down to the Royal Terrace Gardens to London Road.

After almost a full week of non-stop snow in the highlands and rumours of the best pre-season conditions in decades, we decided to brave the roads at the weekend and head to Glenshee to see for ourselves. After a semi-treacherous drive up through Fife and Perthshire and onward to the highlands, Glenshee delivered an incredible day.

The snow on the pistes was light and fluffy and we even managed to get some turns in knee deep powder – we can’t remember Scottish skiing like it! The runs down the Meall Odhar poma were a particular highlight, with the snow at Alpine standards and stunning views when the mist cleared. Amazing stuff for early December in Scotland!

Full of beans from our weekend trip to the highlands, we decided to take another post-work ski, but this time at Edinburgh’s “not-so-dry-ski-slope”, Hillend, which had received a further 15-20cm of snow that day from Monday’s snowstorm. The access road up to the ski centre was shut due to the heavy snowfall, so skiers had to earn their turns by hiking up the access road to the ski centre where the lifts were running.

The quality of snow was unbelievable, and getting some powder turns in the Pentland hills, just half an hour from Edinburgh and with night time views over the city was a surreal, but highly enjoyable experience to say the least!

What better than a rail jam in the centre of Edinburgh to close 2 weeks of incredible snow. Freeze Pro Shop, Sno!Zone and Snow Sports Scotland managed to put together a great competition in Princess Street gardens, attracting many curious onlookers from Edinburgh’s main street, as kids threw down some amazing tricks to chest shakingly loud music from a gigantic sound system!