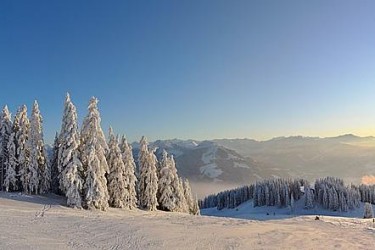 We’ve had a great few months after launching in November 2010, with bookings and product range growing at an encouraging rate. We are now delighted to announce a new addition to our Austrian product range – the charming village and of ski resort of Ellmau, in Austria’s Wilder Kaiser region.

Through the enormous SkiWelt ski area Ellmau is connected by pistes and lifts to other towns, villages and ski resorts such as Kitzbühel, Söll and Westendorf, making it the largest single ski area in Austria! Sharing the giant SkiWelt with its neighboring villages, over 400km of piste is available, most of which is ideally suited to beginners and intermediates. The Wilder Kaiser ski pass is also on offer, opening up over 1000km of great cruising terrain – a keen piste bashers dream!

The SkiWelt is well known for its superb lift network which is well maintained and regularly upgraded. New this year is the super-quick Osthangbahn, a heated 8 seater chairlift in Scheffau that challenges any high speed North American chair! The epic lift network comprises of 91 lifts, 36 chairs, 38 drag lifts, a funicular railway and 14 gondolas shifting amazing 137, 800 skiers and snowboarders per hour.

Ellmau is almost equidistant between Salzburg, Innsbruck and Munich, and is around an hour and a quarter drive from each airport making it ideal as a short break or weekend ski destination.

We have 2 great properties available in Ellmau – the 4 star Hotel Hochfilzer, and the charming apartments Haus Grabriele.

Hotel Hochfilzer has an enviable location in the centre of Ellmau and 150m from the ski lifts. It is a charming and traditional Tyrolean building and has a range of spa facilities on offer. Prices start at £53pppn half board based on 2 people sharing a double room.

Haus Gabriele is in a quiet location and just 100m from the ski slopes of Ellmau. The apartments are comfortably furnished and well equipped for a self-catering ski holiday. Prices start at £19pppn based on 2 people sharing a studio apartment.