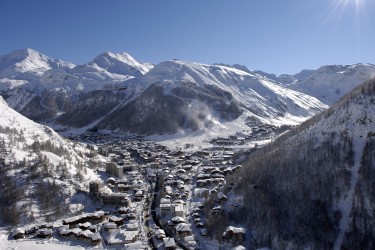 Val d’Isere forms part of the huge Espace Killy ski resort in the Savoie region of France. Based just a few kilometres from the humble town of Bourg St Maurice, it has developed a reputation as one of the premier ski resorts in the world. Now skiers from all over the world flock to the Val d’Isere slopes to enjoy their Winter holiday in what has fast become an internationally renowned resort.

Believe it or not, Val d’Isere was not always one of the most famous villages in France. It began as a little farming hamlet in the French Alps. Summer was a hive of activity when cheese was made, animals were herded and the fields were farmed. Winter, however was a different story, when it started to snow, the villagers were forced to almost hibernate to escape the harsh realities of winter. This was before skiing and winter sports became popular. There were no hotels in Val d’Isere, there were no apartments in Val d’Isere, there was nothing apart from the villagers and the stunning scenery. Cue the 1930s, when the resort began to attract its first visitors and the highest road pass in Europe linked it to the valley. 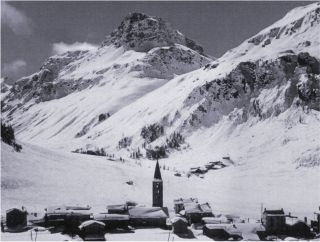 Val d'Isere Village and the Face du Charvet in 1935

For many years Val d’Isere thrived as the playground of the rich and famous. With high prices and an exclusive reputation it served more the elite of the skiing class. It made only sense that the Val d’Isere accommodation available would be high class and luxury and that there was little in terms of alternatives. As time has passed and the costs associated with skiing have dropped, the village has become more accessible to all types of skiers. Although it has maintained its glitzy and fashionable reputation, the exclusivity of the nineties has gone. Skiiers feel more comfortable travelling there. Don’t get me wrong, as you walk down the main street of the town you will still see Spyder clad skiers strolling around, and fur-coated Ruskies peering into designer shop windows, but you will also see young snowboarders with their ski pants nearly around their ankles, and families with children playing in the snow. 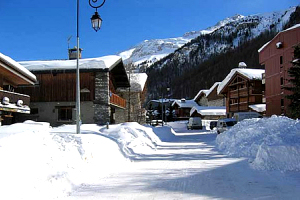 The picturesque Val d'Isere, just off the main street.

The development of  Val d’Isere self-catering accommodation has been a huge factor in helping to being a new, fresher crowd to the resort. Now, instead of having to stay in a luxury hotel or chalet, skiers can book a great ski deal. There are high class residences such as the Residence Les Balcons de Bellvarde or much more budget options. One such example is the Residence Les Jardins de Val and Les Verdets. Luckily, thanks to this new reputation as a more accessible resort, everyone can still enjoy the amazing advantages that Val d’Isere has to offer such as great skiing, awesome après-ski and a family-friendly atmosphere.

So what is so great about the skiing? Well Val d’Isere forms part of the huge Espace Killy with its neighbouring resort of Tignes. Although the two villages are hugely different, Val d’Isere with its traditional buildings and Tignes with its modern and functional architecture, together they form one of the most-loved ski areas in the world. Spread across a whopping 300 kilometres of piste, there is something for everyone. So Val d’Isere has gone from being a small hamlet with no holiday accommodation to a thriving fairytale village with an excellent reputation for being one of the leading resorts in the world. It can cater for all: with luxury chalets, fine hotels and self-catered apartments; Val d’Isere truly deserves its status as a ski resort that stands head and shoulders above its competitors.