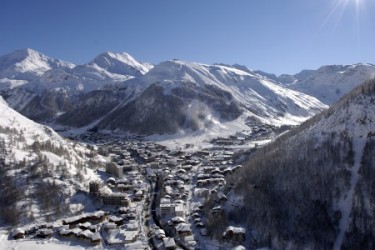 Val d’Isère has a well deserved reputation for being one of world’s best ski resorts for lift-served off-piste skiing and snowboarding. We think it’s one of the world’s best – the Espace Killy is vast, so even though there are plenty of lifts and pistes the area isn’t densely populated at all, so there’s a wealth the off-piste opportunities.

As there are so many classic routes in the Espace Killy, we spent too much time arguing over which should be featured, and couldn’t come to a consensus, so we’ll cover Tignes in a separate blog entry later. This is a quick guide to our 5 favourite off-piste ski routes in Val d’Isère.

Off-piste skiing is dangerous and should never be attempted without any avalanche safety experience. So if you’re taking a ski holiday to Val d’Isère this year and want to ski one of these routes yourself, make sure you don’t do so alone; take a guide and the necessary avalanche safety equipment with you. If you’d like to learn more about avalanche and back-country skiing safety whilst in Val d’Isère, we would recommend attending one of Henry’s excellent avalanche talks (http://www.henrysavalanchetalk.com/)

That’s the boring (but completely necessary) safety brief out the way...now on to the good stuff...

5. The Le Fornet Trees
Far from being one of Val d’Isère’s most epic off-piste ski routes, The Le Fornet Trees earn their place in the top 5 for their dependability. In a whiteout after a heavy dump of snow and with zero visibility, getting fresh tracks above the tree line isn’t really an option, so Val d’Isère’s powder-hounds head to the Le Fornet cable-car and loop the run through the trees until their legs can take no more. There are a number of different routes and most of the trees are nicely spaced for putting fresh tracks in.

Off the back of the Grand Pré chairlift and round the Charvet peak down to the Manchet Valley, the Tour du Charvet is the perfect warm up run to start a day powder skiing, and also a great place to build your confidence in the deep snow. The gradient is not too steep, but steep enough to put turns in and if you get there early enough you’ll feel as if you’re inthe middle of nowhere, with no lifts, buildings or other people in sight.

Val d’Isère’s best powder skiing is probably found in Le Fornet, and this run plays a big part in this. From the top of the cable car take the rather long Signal button lift and make sure you don’t fall off as it turns round the corner and yanks you up the steep slope to the top. As you reach the top you’ll be met by an enormous powder bowl. Stay high and you’ll find rock drops into the bowl or traverse in and take one of the other thousand routes down. Either finish off by continuing into the tress to Le Fornet or cut left before you get too low and get back to the button lift. Repeat until your legs can take no more and you’ll be grinning all day.

Another Le Fornet classic. While the snow conditions can suffer here due to wind and exposure, the run itself is simply breathtaking. From an altitude of about 3000m at the foot of the glacier and all the way down to Le Fornet at 1850m, with nothing other than wilderness and mountains in sight. Get yourself to the top of the Le Fornet glacier and take the red ‘roches’ run until it banks round to the left, and at this point cut right and head for the saddle between two peaks. Once you’ve finished the walk up to the saddle it’s all the way down, skiing a vertical drop of over 1000m to Le Fornet in pristine wilderness.

So called because only the pisteurs (ski patrol) are good enough (or mad enough) to ski it, this couloir and the run after it is everything a great off-piste run should be: it requires a hike, it’s steep, difficult, and very, very scary. You can see it as you come out of the Olympique cable car – although you’ll really have to look for it. It’s the narrow, pencil thin line of snow weaving it’s way down the rock face in front of you.

To reach it you’ll need to hike to the peak of the Rocher du Charvet from the of the top of the Grand Pré chairlift, and then skate or walk along the top until you reach the entrance of the couloir– a good 45 minute slog. Here’s a good point to sit down, have a drink, soak up the astounding views and breathe deep, as you contemplate the insanity you’re about to take on. It’s narrow, steep and long, and once you’re in there’s no way out. It is high and North facing, so the snow quality holds well. As you reach the bottom your legs will be on fire, but once you’re out of the couloir the rest of the ski down will take the pain away. This is where you’ll find the best snow in Val d’Isère, and you can still get fresh tracks long after a snowfall; you’ll ski down a slope which is shaded by the peak, sheltered from the wind, and accessible by only the best and craziest skiers, of which you are now.

If you’re planning an off piste adventure in Val d’Isere then have a look at our wide selection of accommodation, hotels and apartments in Val d’Isere here. And, if you’d like to chat to a member of the PowderBeds team just call 0845 180 5000. We’d love to hear from you.

Have we missed anything here? Are there any other off piste routes in Val d’Isere that we should have included? If so leave a comment below - we’d love to hear your thoughts.