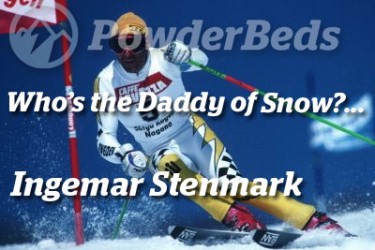 Who is the daddy of the snow? This is a question that is frequently debated here at PowderBeds HQ. And, with Father’s day around the corner, a small ongoing debate between colleagues grew quickly into an office wide dispute.

After making very little progress, we decided to settle the matter by putting the question to our Facebook community and to some of the leading journalists in the ski industry.

So who has been named “the Daddy of Snow?”

Up for the running were the likes of Mathias Zdarsky from Austria, a chap who, all the way back in 1905 invented the downhill skiing we know today.

Hannes Schneider from St Anton was up for the running, and was nominated for his role in spreading the sport worldwide as far as Japan and the USA.

Before them all though was Sondre Nordheim who was the first to invent the telemark technique in Norway in the 1980s.

Patrick Thorne, ski editor for the Independent (http://www.thesnowhunter.com/) said that he “got the biggest buzz from visiting the preserved apartments and sitting at the desk of Johannes Badrutt who invented the ‘winter sports holiday in St Moritz in 1864”

In terms of racers, who could forget Franz Klammer on ski Sunday throughout the 70s? Peter Hardy of WeLove2Ski.com described Klammer as “the one person in my lifetime who has been the biggest influence on skiing”

But what about the Biathlete Ole Einar Bjorndalen from Norway, with more than 90 world cup golds he recently overtook Ingemar Stenmark for having the most in any winter sports discipline.

And, the list goes on and on and on!

In third was Glen Plake, founder of Extreme skiing, in second Craig Kelly, pioneer of modern freeride snowboarding and in first, known as “the greatest slalom and giant slalom specialist of all time”, with a total of 86 victories, 32 more than that of “the Herminator” Hermann Maier and now to be crowned “the Daddy of the Snow” by PowderBeds is...

11) Sondre Norheim - Pioneer and developer of the telemark technique