Tignes ski resort sits in a vast snowy bowl and offers multiple attractions to skiers and boarders alike. To begin with, the resort is one of Europe’s highest, so has both a great snow record and great snow. Secondly, it’s a big area with a big vertical that makes up half of the world famous Espace Killy region, named after the legendary French ski racer and skiwear designer Jean Claude Killy, and shared with neighbour Val d’Isere. Thirdly, the lifts go high, right up to a big glacier skier that remains open in summer and autumn and can be accessed very quickly by an underground funicular train. Fourthly, and finally, the resort has been increasing its off-slope offering in recent years, with most noteworthy the opening of a state-off-the-art Aquatic swimming pool complex, with the aim of making your ski holiday complete.

Although Tignes is lumped in with other French purpose-built ski areas with a high proportion of 1960s era concrete accommodation construction, they’ve actually been here since the 1930s. It wasn’t until the mid-1950s that ski resort development really got underway (particularly when the original village of Tignes Le Lac was submerged after the construction of a new damn in the valley below), eventually creating five main village bases, three of them (Le Lac, Le Lavachet and Val Claret) now more or less merged in to one and forming the core of the resort.

Today the combined resort can accommodate around 30,000 guests per night, plays host to 1.5 million skiers per year and has around 80 restaurants and more than 100 shops to cater for them all, making it one of the big players in the Alps in every respect.

Powderbeds offer a wide range of Tignes Accommodation including hotels and apartments throughout the resort. Our Tignes Hotels include the Hotel Le Taos and Les Suites du Nevada our Tignes Apartments include the very popular Ferme du Val Claret and Le Hameau du Borsat.

There's a choice of ski accommodation to suit every budget and for our best prices and offers visit our Tignes Ski Deals page. 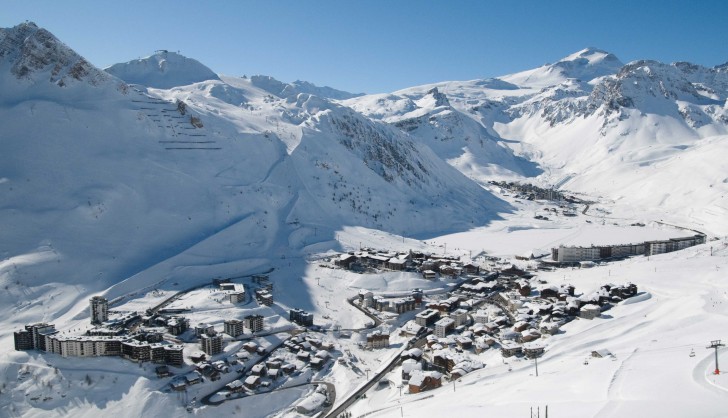 Long sunny days spent on quiet slopes - April is a fantastic time to head to the Alps.