Quite a good choice for first timers, especially if you base yourself in Les Claux for maximum convenience of accommodation, equipment rentals and proximity to the nursery slopes, which are right by the village.

With lots of longer easy green runs to progress on to, Vars provides enough to challenge without being too daunting, and if you progress well you’ll be able to get across large sections of this big ski area right over towards Risoul within the week. 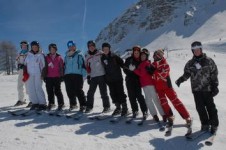 Intermediates will love the Foret Blanche region and the potential to ski fast on long blue and red runs right across to Risoul, for lunch perhaps, and return the same afternoon.

There’s a great range of terrain from open powder bowls on the upper slopes above the treeline, and more technical winding routes through pretty woodland closer to the resort. Some of the runs are very long indeed, including an exhilarating (and rather exhausting if you don’t take a break) eight kilometre (five mile) run, the longest on the circuit. 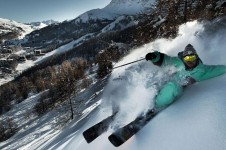 Although not well known for its challenging terrain outside the area, Vars does indeed have plenty of steep runs including a famed bump run just above the village. However some of the steepest terrain overall is towards the top of the ski area at Chabrieres. Experts can choose between around a dozen black runs, with Cuni generally regarded as the most challenging, there are also plenty of off piste itineraries and the local mountain guides office will be happy to lead you to and down them.

An unusual attraction is Vars Flying Kilometre speed skiing course, home to an annual competition where racers regularly top 160kph (100 mph) as they fly (nearly) down the slopes. The course, reached by the Crévoux chair, is sometimes open for holidaymakers to try out under strict supervision. 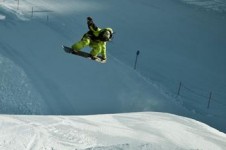 Vars has two terrain parks that feature pre-shaped terrain so they’re ready to go with minimal snow cover at the start of the season. As a result the resort has achieved fourth place in a national ranking of the best terrain parks in France.

The L’Eyssina park has five zones corresponding to traditional slope gradings with very easy (green), easy (blue) moderate (red) and difficult (black) terrain – except there are easy and ‘experienced’ blue lines. The easier blue area has two tables and a 40m long hip, the more advanced blue area has eight tables between eight and 12 metres high. The red zone has slope style, tables, eight rails with kink, gap to rail and a step down. The Black zone has a big air and special units. The cool zone chalet is the place to watch riders from the terrace, enjoy the sound system and visit the barbecue.
The second, Ecrins Snow Park, has smaller features but has a C Box, S Box, 2 rainbows, a large box, a very large wave box and many more hits. It stages JIB and night sessions every week. 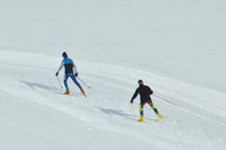 Cross country skiing is popular in the area and there are 40km of cross country trails, a quarter of which are easy, a half medium rated and a quarter suited to advanced skiers. The trails link the four Vars villages with the longest extending across the valley beneath the ski slopes linking the villages to Risoul. Ski shops in the village can provide rentals, and cross-country ski lessons are available from the ski school.

Despite the rather southerly location of the Vars ski area in the Alps, both the main Le Claux villages and the tops of the ski slopes at 2750m are high, with a sizable proportion of the terrain north facing for protection from the thawing effect of a reputed 300 sunny days here each year.

Vars manages to accumulate an average 2.5m (8.3 feet) of snow each winter (presumably much of it falling at night, given the sunshine record) and there’s also ever more snowmaking covering more and more of the key lower runs.