Every skier and snowboarder worth their salt enjoys the challenge and thrill of taking on the most extreme run in resort. The frisson you feel as you scope it out from the chairlift and the heart-in-mouth sensation you get as you perch at the top, mustering the courage to launch yourself down, is irresistible to thrill seeking skiers and riders.

For many, the actual descent invariably requires relinquishing all style in order to make it to the bottom unscathed, but this tends to be quickly forgotten, and can be overlooked when boasting about your achievement in the bar later.

Every ski resort has a certain degree of relatively challenging terrain, with some much more extreme than others, but there are certain runs whose notoriously difficult terrain sends shivers of fear and excitement down the spines of advanced skiers and boarders throughout the world.

There are obviously a great many precarious precipices, invariably only accessible by helicopter, which extreme pro-riders throw themselves down with apparent ease, but we have confined our list to those runs which are accessible, and worthy of contemplation, by mere mortals.

Jackson Hole in Wyoming is renowned for being one of the most challenging ski resorts in the world and is on the to-do list for a great many extreme skiers. And for anyone making the pilgrimage, the infamous Corbets’s Couloir is an absolute must. 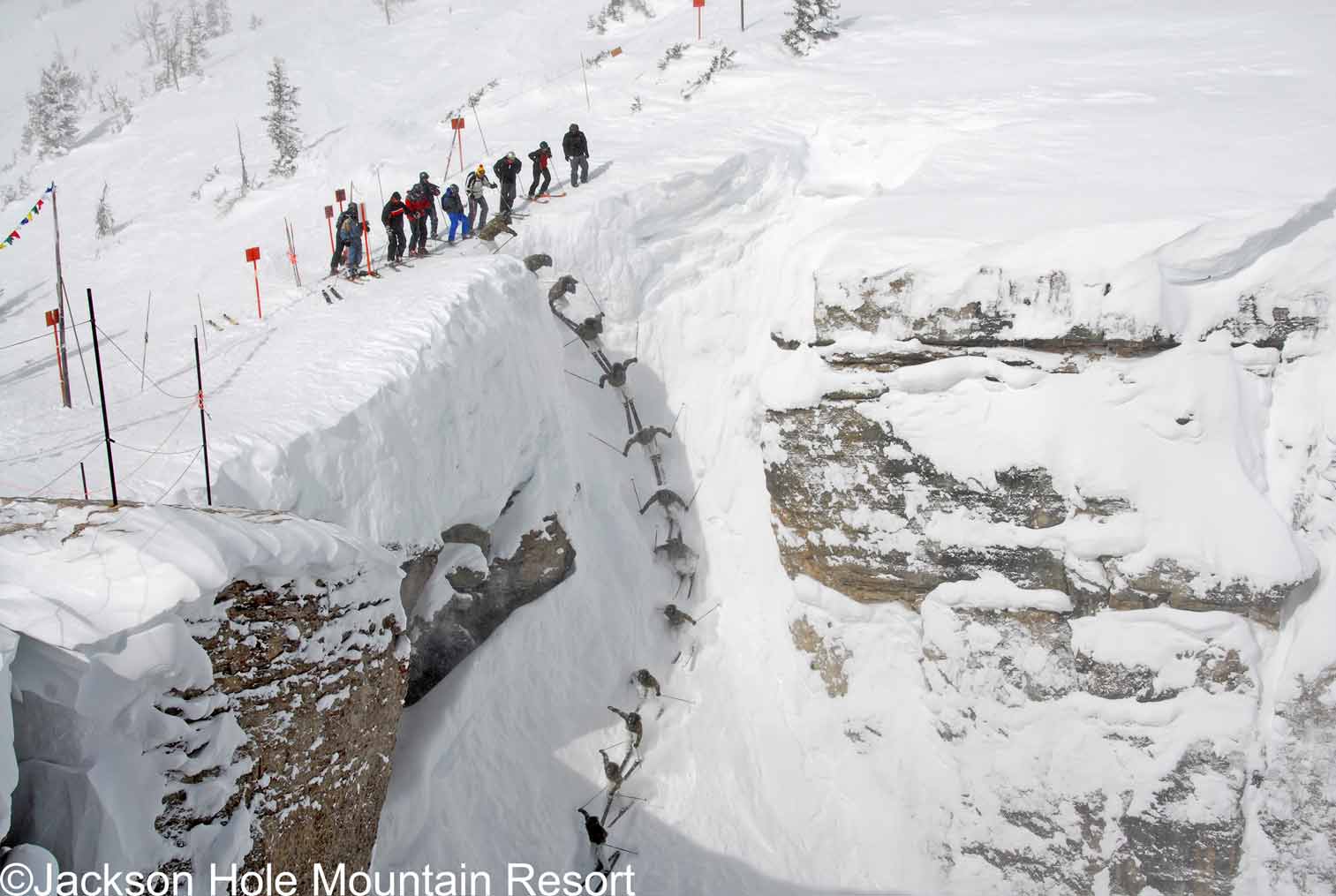 Entry into the run is the hardest part, and the difficulty varies depending on how much snow they’ve had. If there’s a good base then the drop-in is a, not inconsiderable, 10 feet, but if not, it can be as much as 30 feet. And it’s not just a case of chucking yourself in and hoping for the best. 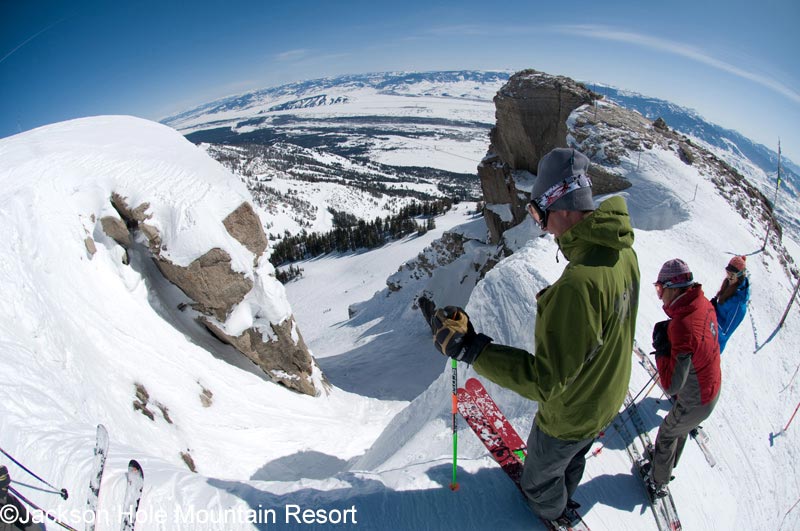 A narrow chute with rock faces on both sides mean that you have to make, and land, an immediate turn in order to avoid a nasty demise. However, if you do manage to successfully negotiate the perilous entry, you’ll be rewarded with some nice powder turns, and some serious slope cred.

La Chavanette in Avoriaz is more commonly know as The Swiss Wall, and as you stand at the top, it’s quite apparent why. The initial gradient of this notoriously perilous run is so steep that from the top you’re unable to see what awaits you beneath. The only thing for it is to take a leap of faith and keep your nerve. With a pitch of over 50 degrees, if you fall, you’re going to tumble a long way and seriously injure yourself, or worse. 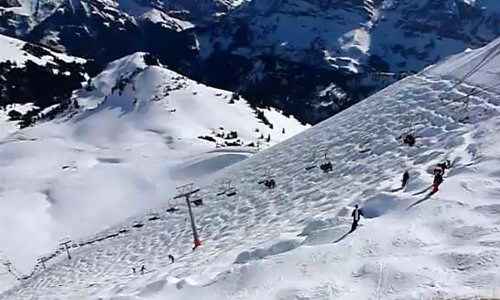 The extent of its difficulty very much depends on the conditions. It is extremely exposed and as a result, becomes icy very easily. It also tends to develop enormous moguls, which add to the challenge further still. So, if you want to improve your chances of survival, the best time to tackle the run is at the start of the day, before the moguls become massive, when wind is at a minimum, and the snow is soft. 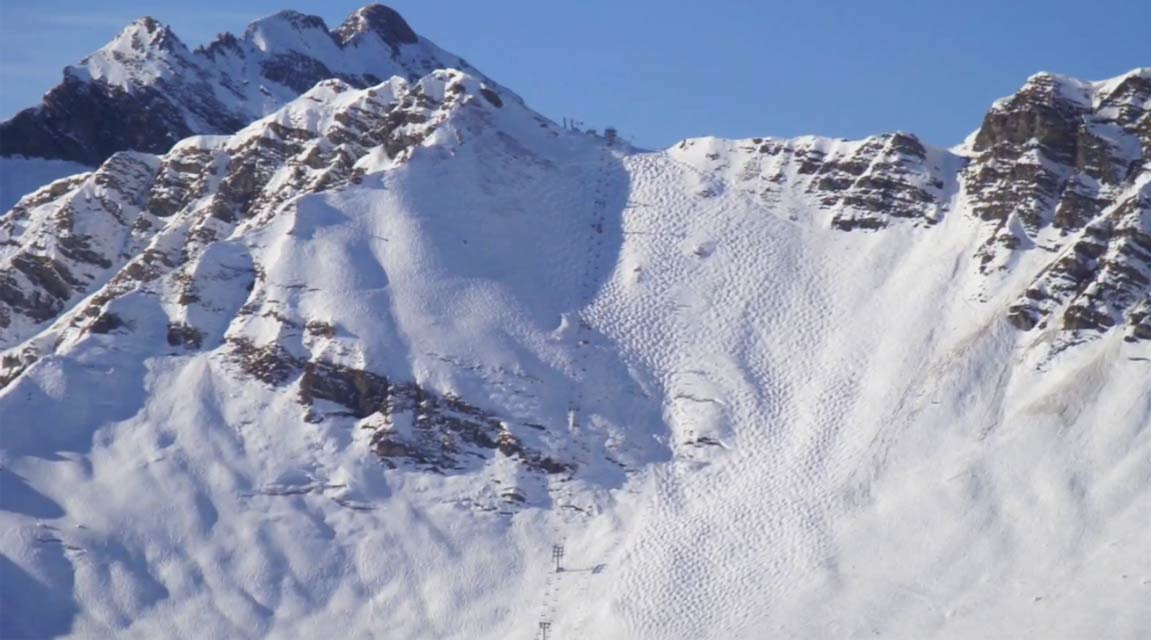 The good news is that if you manage to hold it together for the first section of the run, you should live to tell the tale, as the lower section is infinitely easier.

Harakiri, the Japanese ritual of suicide by samurai sword, is a fairly apt moniker for this terrifying piste in Mayrhofen, as throwing yourself down it is, indeed, akin to suicide. 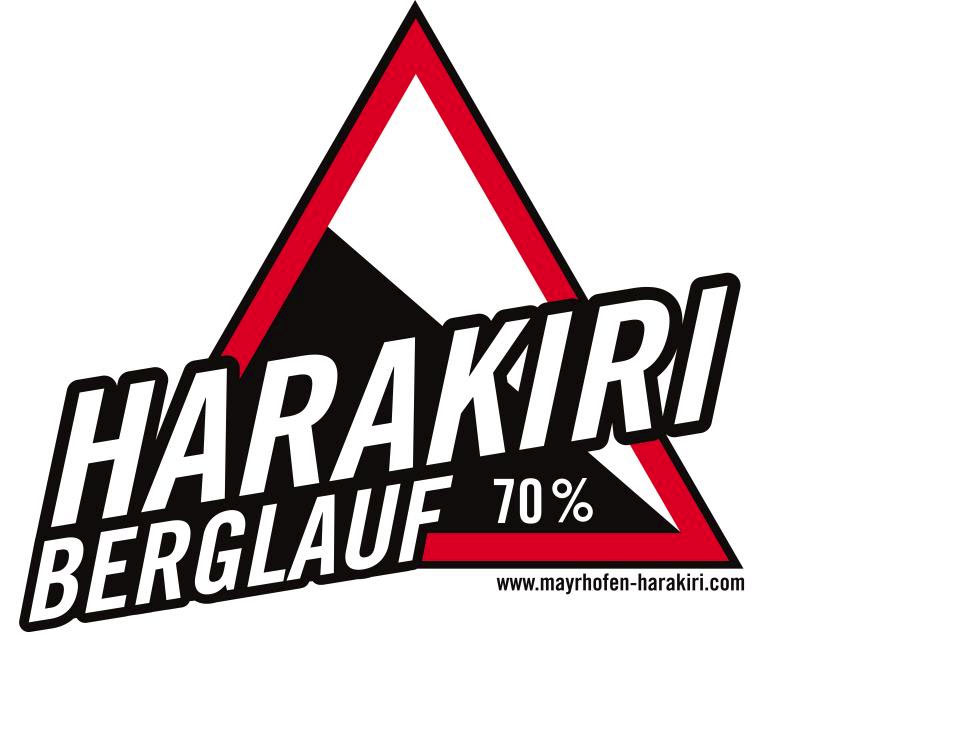 Although not a particularly long run, what the Harakiri lacks in length, it more than makes up for in gradient. Reputed to be the steepest groomed run in Austria, it has a pitch of 70 degrees at its steepest point. In icy conditions one badly executed turn could see you tumbling to the bottom. 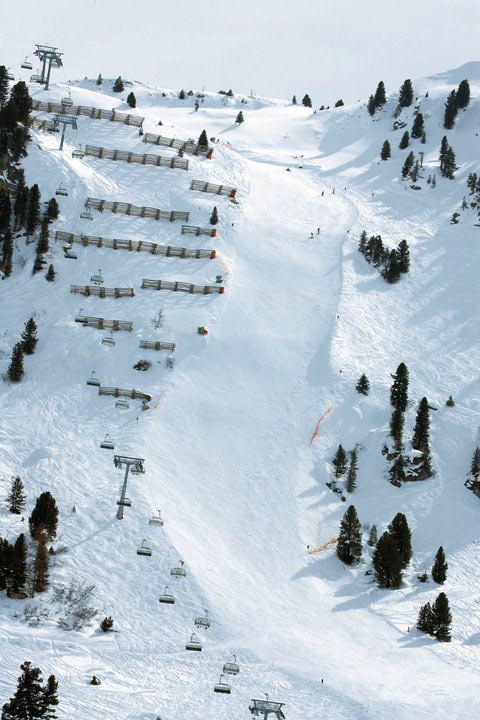 If the pressure of that isn’t bad enough, anyone taking it on has to do so in front of an audience of spectators cheering, or jeering, from the Knorren six-man chairlift, which passes overhead. If you’re prone to stage fright, this is possibly one to avoid.

Even the name of the infamously challenging resort of La Grave incites fear, especially when you realise that its indomitable terrain has indeed laid claim to the lives of many who’ve braved it. Renowned for its steep, sun-starved north facing slopes, narrow couloirs and rocky outcrops, this resort should only be tackled by the most advanced skiers and boarders. Not least because there are no marked pistes, only one ski lift, no ski patrol and no avalanche control. 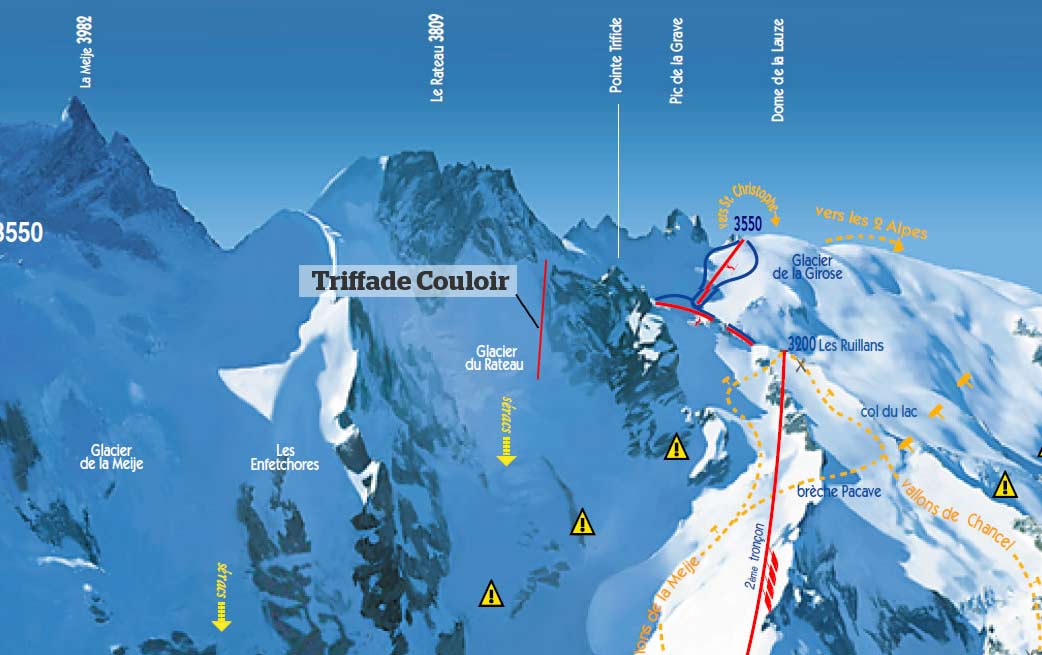 The most treacherous run is the Triffade Couloir which has claimed no less than eight lives. Not only is it extremely steep, more than 40 degrees in places, it is also extremely narrow. At some places it’s only a ski’s length wide, which leaves absolutely no margin for error. And a fall here could prove fatal. This video shows you how just how steep and narrow this couloir really is.

However, in good conditions, advanced skiers and boarders will be rewarded with an exhilarating run of around 1000 feet at 45 degrees.

Delirium Dive in Sunshine Village is the ‘must do’ run for experienced thrill seekers in the Banff area.

The adventure starts with a near vertical drop-in over a five to six metre band of rock, which then feeds into a narrow chute. Add to this a 50 degree pitch for most of the descent, and you have one hell of a scary run. To make things worse, the run’s ridiculously steep gradient makes it extremely avalanche prone, so anyone attempting it must wear a transceiver, carry a shovel and probe, and be accompanied.

However, those brave enough to take the plunge can take assurance from the fact that the area is considered to be in-bounds and is closely monitored for avalanche risk. That won’t protect you from the rocks though!

And as if Delirium Dive wasn’t enough expert terrain Sunshine have also offer thrill seekers Wild West on Goat’s Eye Mountain. Wild West is another in-bounds off-piste area which is arguably a tougher challenge than Delirium Dive. Picking the right route through the chutes is essential as a wrong turn can mean air will be mandatory!

Take the Bochard Gondola to the top of Chamonix’s Grand Montets and you’ll see an area in front of you with netted fencing and a selection of rather apt warning signs. Welcome to La Poubelle, or ‘the dustbin’ in English.

This exceptionally challenging off-piste route begins with a heart-in-the-mouth 30 metre abseil over rocks to where the snow starts and you can safely clip on your skis. This is experts only terrain and should only be attempted by skiers carrying ropes and with mountaineering experience. If in any doubt, take a guide. 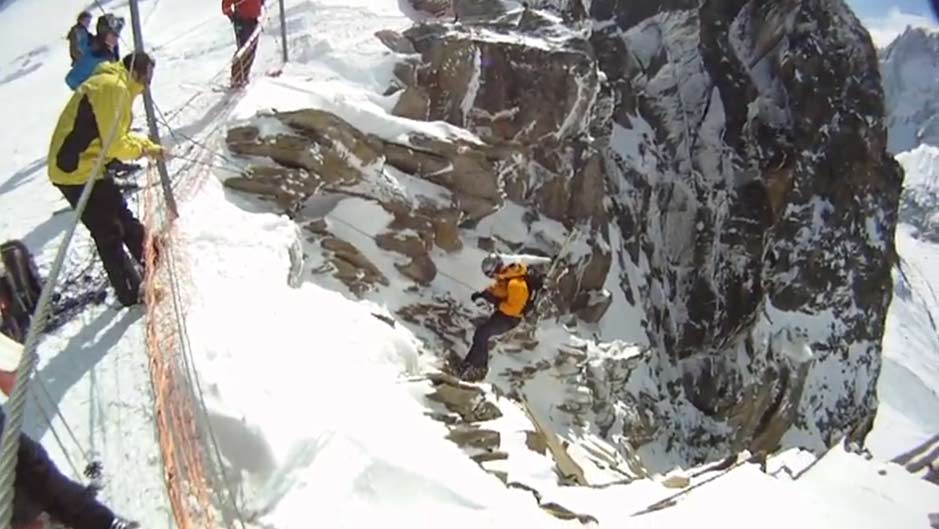 The top of the couloir is very steep and narrow and requires short jump turns but it eventually opens out into a wide open bowl with room to open up the turns and find some speed.

Be warned - at this point you’ve still got some way to go before finding your way down to Montenvers. There’s still a cliff band between you and safety with a 20 foot fixed rope rappel at the easiest point.

So the Poubelle isn’t to be taken lightly and takes planning, focus, the right equipment and if at all possible a good guide to show you the way. The video below gives you an idea of what the access to the couloir is really like.

The Tournier couloir in the Three Valleys offers more appeal to most good skiers than the roped up, white knuckle challenge of the Poubelle. In 2013 Meribel planned to change this famous off-piste run into an on-piste black run, and sought to remove some particularly nasty natural obstacles. Whether classified as on or off-piste, this couloir remains strictly for experts only.

The Tournier chute vies for the title of steepest in the Three Valleys with Courchevel’s next door Grand Couloir. Thankfully, Tournier is much easier to access than its near neighbour, with no sketchy ridge to negotiate before reaching the access point.
The route is challenging but with good snow cover and in good weather it’s far from impossible for advanced and expert skiers. The relatively safe drop-in and ski-out don’t require specialist equipment but be warned, it’s steep!

Powderbeds offer ski hotels and apartments in some of the world’s best destinations for extreme skiing such as Chamonix, Avoriaz, Meribel, Les Deux Alpes, Val d'Isere, Zermatt, Whistler, Aspen and many more. Use our ski accommodation search box in the top left hand corner of this page to see our full range of accommodation in France, Switzerland, Canada and USA.

Extreme Skiing Disclaimer!
Off-piste extreme skiing can be very dangerous, especially when attempting some of the terrain described above. Always ski with others, carry the right equipment in case of an emergency and whenever possible ski with a local guide. The ski routes in this piece should only be attempted by experts.

Have we missed anything here? Are there any other extreme ski routes that deserve to be part of this blog? If so leave a comment below; we’d love to hear your thoughts.