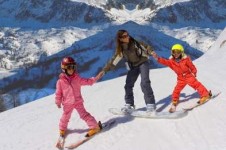 The long 5km plateau upon which Isola 2000 sits means there’s a long, very gentle slope right along the snow front by the resort base. Easy-to-use lifts mean beginners have an ideal nursery slope area with a nice relaxed atmosphere in which to learn the basics and then progress on to the long blues above by the end of the week. A special beginners-only low-priced lift ticket is available that is just valid on four of the key lifts serving the nursery slopes at the base of the ski area.

Predominantly an intermediate’s resort, more than 75% off Isola’s runs are graded blue or red, with descents up to 5km long. The Pélevos sector gives perhaps the widest range of intermediate skiing in the resort, but all areas have plenty of runs to choose from. During the main holiday periods the blue Chapelle piste is open for night skiing twice a week. 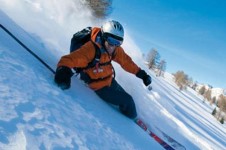 The options for advanced level skiers are limited to four groomed pistes, the toughest of which is generally recognised as the 3km long Boumphrey run which drops down from the ski area’s highest point at Cime de Sistron in to a snowy valley above the treeline. The Mont Saint Sauveur sector next to this has more steep terrain and is the most popular sector for off piste skiing and boarding. 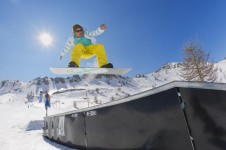 Isola has been popular since the early years of the sport, with the first French snowboard club, the Back To Back Club established here. The resort’s uplift is predominantly chairlifts and gondolas, so getting around on the slopes is easy and there’s a terrain park at 2,300m complete with half pipe and boarder cross. The snowboard club is still going strong and takes a leading role in organising events and activities for boarders in resort, including gear demos and lift pass discounts. 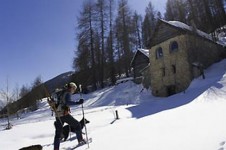 Despite its southerly latitude Isola 2000 has a good snow record receiving an average annual accumulation in excess of four metres (13.3 feet).

The resort’s altitude of 1800m also makes it one of the highest resorts in Europe and with all the skiing above that, there’s rarely a problem of melting on lower slopes, even at the start and end of the season, as the lower slopes are pretty high.