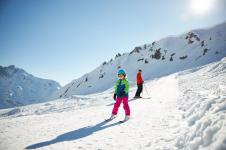 Les Arcs is a popular first-ski destination for beginners thanks to its easy-to-use and functional design of ski accommodation, which means you walk out of your apartment each morning, straight on to the slopes, and the beginners area is right in front of you. All four villages have gentle slopes right by the resort itself, and lifts specially designed for ease-of-use for beginners to try first. The altitude of the area means these slopes are normally snowsure right through the season.

The wide range of Les Arcs ski schools, with meeting points in every resort, have a reputation for getting people progressing quickly and in the era of longer, straighter skis from the 1970s and 80s before the success of snowboard design led to skis becoming more curvy, the resort pioneered a very successful learning technique called Ski Evolutif. Fortunately modern skis are more user friendly and easier to get started on than those 20 years ago anyway. 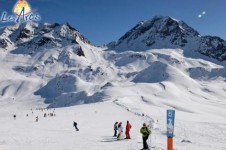 With more than 80 runs and 125km of fast long blue and red runs on the Les Arcs side of Paradiski alone, the regional name may be an advertising slogan but it is close to the truth for recreational skiers. It’s great fun to whizz around the mountain using the high speed lift network to ascend and enjoying the long descents of up to 7km back down.

A crossing over to La Plagne on the Vanoise Express lift is a must during your stay (just because you can, and of course for the bragging rights of riding the double decker cable car that crosses in a single span without support towers hundreds of metres above the valley floor, cripes!) ...but the full Paradiski pass is one of Europe’s most expensive, and to be honest there’s so much skiing in Les Arcs that, beyond the novelty value, you may not feel the need to ski La Plagne more than once (better to stay in La Plagne of you want to ski there a lot!) so a more affordable day extension may be better value.

Night skiing takes place on different days throughout the week, to around 8.30pm, with a party atmosphere on the slopes. 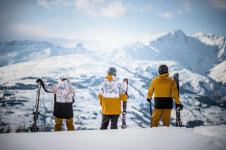 Les Arcs has a strong reputation for its advanced terrain with more than 40km of black rated piste, divided up in to 19 runs. The 2.5km long Robert Blanc descent is generally regarded as technically the most difficult, but the resort is probably better known among advanced skiers for its 7km long, more than 2,000 vertical metre, descent to the village of Villaroger from the top of the ski area at Aiguille Rouge, which is regarded as one of the world’s classic runs. There are also lots of great off-piste itineraries to tackle with a guide.

The resort remains at the forefront of new snow sports, so this is a good place to try speed riding, essentially descending a ski slope with a parascending sail on your back in order to get some really big air (http://www.speedriding-school.com). Heliskiing is not allowed in France, but a helicopter company (http://www.helimountains.com) will pick you up and fly you the short distance over the Italian border for a heliski descent there. 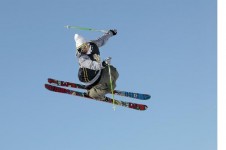 Les Arcs claims it invented snowboarding, possibly even before Jake Burton got his first boards out in Vermont, as the resort was always famous in the 1970s and ‘80s for being the Mecca of ‘nouveau’ ski sports such as the short-lived and now much derided mono-ski. It is also a home of some of the first mass market cool ski movies in which some of the aforementioned first boarding experiences appeared, most notably the early 80's film, Apocalypse Snow, after which the resort’s Apocalypse Snowpark was named.

The park is fitted out with kickers, rail, hips and more for all ability levels, and they’re all colour coded from the standard green for easiest to black for most difficult, so you can pick your line depending on the level of belief you have in your abilities. Other attractions include a boardercross course on the Plan Vert slope. Around ten pistes are also left ungroomed for freeriding pleasure with the security of knowing you're on a patrolled and avalanche-tested piste. 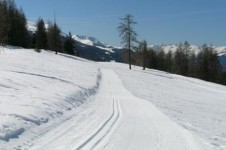 There are more than 90km of cross country ski tracks on more than a dozen loops in the wider Paradiski region, all free of charge to use. In Les Arcs itself there are 30km of trails open all season long and varying depending on the altitude. For example a five kilometre loop, starting in Courbaton at Arc 1600 passes mostly through the trees while another five kilometre loop up at Arc 2000 is through more open terrain. There is another five kilometre loop departing from the Jardin Alpin in Arc 1800 and a longer 15km loop down at Bourg Saint Maurice, accessed via the funicular down from Les Arcs.

Les Arcs receives over five metres (17 feet) of snow annually on average and the high altitude of the ski area, with most of the terrain above 1800m - and 70% above 2000m - means that doorstep skiing is more-or-less guaranteed from the start of the season in early December through to its end in late April.

There are more than 120 snow guns covering the key runs and glacier skiing is possible up on the Aiguille Rouge.

Les Arcs is part of the huge Paradiski area with La Plagne and they are linked by the Vanoise Express cable car. You can buy a Les Arcs only lift ticket or one that covers the whole Paradiski area.