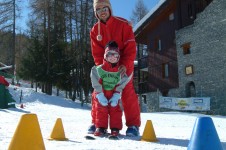 A good choice for beginners as there are nursery slopes right by the village with three free lifts to practice on when not in ski school lessons. You can then progress on to long easy runs carved through the woodland around the village and even have the thrill of the cable car ride across to Peisey Vallandry and Les Arcs beyond – all accessible on relatively easy green and blue runs. 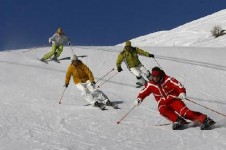 The La Plagne ski area is one of the biggest and best for regular holidaying skiers and boarders. As well as the great volume of terrain, there’s also a splendid variety, ranging from glacier skiing high above the resort to vast open powdery bowls above about 2000m where the altitude stations are, and then wonderful ski trails cut through the forest close to Les Coches and Montchavin themselves. You can even combine many of these runs together to form incredible descents of up to 15km (nine miles), thanks to the world-class 200m vertical.

Of course there's also the connection to Les Arcs via the Vanoise Express double decker cable car, crossing hundreds of metres above the valley floor without needing central support towers, which gives instant access to as much terrain again. The added bonus of staying in Les Coches is that, being at the heart of the combined area, it is feasible to get to Villaroger on the far side of Les Arcs or Montalbert on the far side of La Plagne, so you have a great sense of travelling from village to village. Oh, and if you don’t get enough kilometres in during the day, one piste above Montchavin is floodlit for night skiing.

It’s worth thinking about what kind of lift ticket you need as the full Paradiski pass covering all ski lifts on the La Plagne and the Les Arcs sides during its validity is unfortunately one of the most expensive lift tickets in Europe.

You may find a La Plagne-only pass perfectly adequate, or a ‘Paradiski Discovery’ ticket, which allows one return crossing and use of Les Arcs lifts while over there for a day of your choice during the pass’s validity, for a little more than a La Plagne-only but quite a lot less than a full Paradiski ticket, is perfectly adequate for you. After all, if you’re wanting to ski in Les Arcs every day it might be better to just stay in Les Arcs! 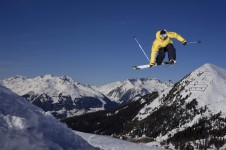 One of the world’s biggest and best ski areas, La Plagne and Paradiski of course have plenty of on and off piste challenges for advanced and expert skiers in their 10,000 hectares of terrain. Many of the black runs are located away from the busier blues and reds with, for example, near 1000m descents from the top of the Bellecote glacier lifts or, at the other extreme of the area, dropping around the back of Le Biolley.

Ski guides will happily take you on one of the numerous off piste routes in the area, one of the most popular being a near 2000 vertical metre run down to Peisey- Nancroix in the valley (possible if snow conditions are good). 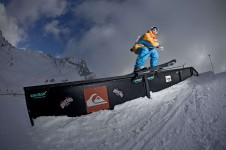 Les Coches and Montchavin have good snowboarding facilities including one of La Plagne’s four main terrain park areas. The park faces due north with great views of Mont Blanc and the Bellecote mountains as you descend. It has rainbow and other rails, table tops, fun box and a permanent boardercross course, as well as a full sound system and a full events calendar. Beginners who are just getting used to freestyle can try their technique in the novice zone.

Apart from the other terrain parks, with more still over in Les Arcs, the Paradiski area of course has the same myriad of attractions for boarders as it does for skiers, with great powder skiing on the upper slopes for freeriders and lots of natural hits in the tree-lined runs nearer to Les Coches. 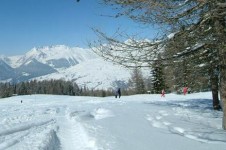 There are 16km of cross-country ski trails in the region, reached by taking the Plan Bois or Lac Noir chairlifts up from the village. The cross country route stretches from Les Bauches, around 3.5km from the top of the chairlift on an easy green route. There are two blue category trails totalling 9.5km which go in the opposite direction towards Plagne Bellecote and one advanced level forest trail (3.5km).

You’ll find several restaurants at each end of the route and you’ll pass several more. Use of the cross-country tracks is free but you will need to pay a few Euros to ride the lifts each time to reach the tracks. There are another three cross-country ski areas in the area, totalling 80km of tracks between them, with a major centre at nearby Champagny le Haut which has 22km of trails.

The ski slopes at Les Cochesare at a relatively healthy height for snow cover, and as chairlifts can take you nearly 2,000 vertical metres higher to the year-round glacier snowfields above La Plagne, which formerly was used as a summer snow sports destination, access to snow slopes is more-or-less guaranteed, even in a very bad year.

The resort receives over five metres (17 feet) of snow annually and about a quarter of the huge La Plagne ski area has snow-making, with around 500 snow guns which can operate as soon as temperatures are low enough.