You’ll find on your Les Menuires ski holiday that the resort is one of the big hitters in the 3 Valleys, the world’s largest lift-linked ski area. It is located in the Belleville Valley with Val Thorens, the highest resort in Europe, above, and St Martin de Belleville, with which Les Menuires is jointly promoted, below. The next valley over is that of Meribel, and beyond it, the Courchevel Valley.

As with most of the large French purpose-built ski areas, Les Menuires dates from the 1960s, and began operating with a lot of concrete architecture which was modern then but is popularly regarded as ugly now. But in the intervening near 50 years the resort has expanded, spawning a number of districts with lots of new development, much of it considered far more architecturally attractive, especially the chalet-style Reberty development which is something of a British enclave. A network of free shuttle buses link the various sectors off the slopes.

Unlike Courchevel with its hotels and Meribel with its chalets, Les Menuires accommodation is mostly apartments, and its clientele has a higher proportion of French guests than any other ski resort in the 3 Valleys - although you’ll still hear plenty of English voices here.

PowderBeds offer a huge choice of self-catering Les Menuires accommodation to suit most budgets. Our Les Menuires apartments offer everything from basic good-value two star up to luxury four star with superb amenities.

Les Menuires is constantly improving its ‘offer’ to skiers, with better and better facilities on and off the slopes opening each season. Architectural improvements include the creation of a stylish modern church steeple – an unusual idea in this day and age - but it has added some style and a unique identity to the heart of the resort.

Our most up to date prices and offers are available on our Les Menuires ski deals page. 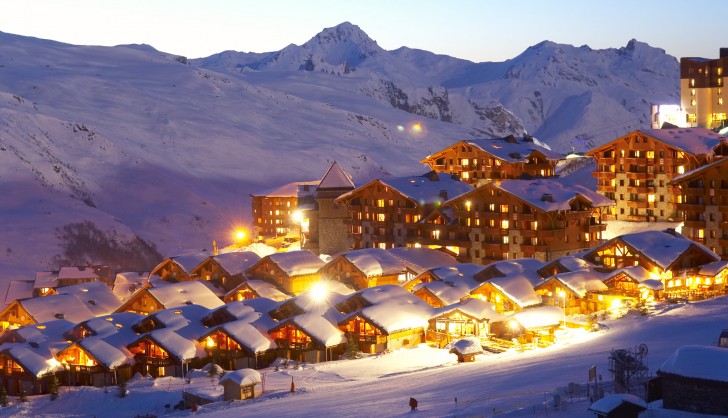 The Best Family-Friendly Ski Resorts to Spend New Year in

Fancy welcoming 2016 on the ski slopes? Check out our pick of the best French ski resorts in which to spend New Year.