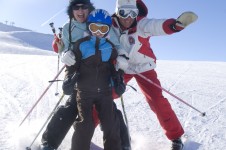 Beginners are rather spoilt at Val d'Isère with around a dozen ski schools to choose from, several of them British owned and operated. Then the resort has created special beginner zones up on the mountain so you can make your first turns in a custom designed area. There’s one on the pistes of the Verte in the Bellevarde area and the Madeleine in the Solaise area.

From these there are plenty of long greens and blues to progress on to with easy to ride chairs and gondolas to take you back up the slopes. 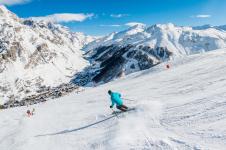 A veritable ‘intermediates paradise’ with more than 100 blue and red graded runs in the Espace Killy and recent investment in fast modern lifts meaning you can generally reach the furthest points distant above Tignes within half a day – not one of these giant ski areas that’s actually so big you can’t make it to large sections of it and return within the day.

Val d'Isère is made up of several sectors including Bellevarde, the top of which is reached via the Funival, and Solaise, the runs from which meet those of Bellevarde down at the village centre. Fornet up at 1930m has preserved its authentic Haute Tarentaise character and is an unspoilt hamlet and gives access to the ski area’s highest sport at the Pissaillas glacier, a summer ski area. The glacier is well suited for intermediates with a range of blues where you can often beat the crowds at the beginning of the week. However watch out for the long flat sections as you come off the glacier, skiers must attempt to maintain speed through the flat sections at the bottom of the Vallon de L’Isère valley.

Good intermediates will be capable of tackling the famous OK men’s downhill race course, not at top speed perhaps, just enjoying the ride. 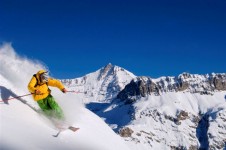 One off the world’s great resorts for advanced skiers, with no less than 25 black runs to enjoy and Olympic downhill runs to test out. Most infamous is La Face, created for the ’92 Olympics which descend nearly three kilometres (two miles) from its peak at 2,809 and pitches at up to 63%.

However the area is most famous for its off piste (of which there is 10,000 hectares or ten times more than pisted runs) with forested areas like Danaides, accessed from the Solaise Express chair among the more popular. The Face du Charvet is another off piste descent of legend that is on every serious off-piste skier’s ‘slopes to ski before I die’ list, but always check the avalanche advice and go with a guide group. Other classic back-country routes that Val d’Isère has to offer are Col Per, off the Pissaillas glasier down to Le Manchet valley, and Le Grand Vallon, a beautiful back-country bowl accessed by dropping of the back of the Signal poma. Why not brush up on your avalanche awareness, and back-country safety by attending Henry’s infamous Avalanche Talk, a very entertaining event that takes place periodically throughout the season in various bars and pubs in town.

There’s enough to do on the local slopes, but if this is your tenth season here you might consider some of the additional options from ski schools and mountain guides, these include an off piste ski safari to neighbouring resorts as far as Paradiski; heliskiing in Italy, ski touring excursion and a trip to nearby Bonneval – another famous off piste destination. 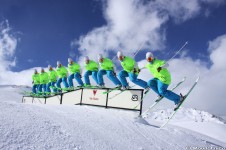 Val d’Isère has a very highly regarded snowpark spread over 35 hectares and three lines of kickers of varying difficulty, a gentle blue line for learners, a red line for intermediates, and the daunting black line for the pros! Its attributes include a variety of interesting features depending on the time of season, namely two boardercross courses, several quarter pipes, rainbow rails, flat boxes, and wall rides for the jibbers among us. The park has its own drag lift although it is relatively slow and sometime a little unpredictable. Of course there are more terrain parks to try out across the Espace Killy over in Tignes too and for freeriders this excellent region has just as many treats and challenges for boarders as skiers. The network of high speed chair and gondola lifts makes getting up the slopes easy too. 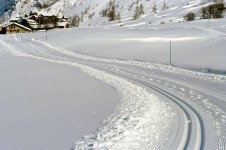 Val d'Isère has some excellent cross country ski routes, which combined with neighbouring trails in Tignes combine to around 44km of tracks in total.

Loops are up to 8km long and cover all kinds of terrain from open mountainside to forested valleys and are available in very easy (green), easy (blue) and moderate (red) levels of difficulty. They are located in the Manchet valley – where the longest trails are located, as well as at La Daille, Fornet and the lake of Ouillette.

Val d’Isère is one of Europe’s most snowsure resorts thanks to several factors including the high altitude of the ski area, which includes glacier slopes that are among the few remaining that are still open for summer skiing and the height of the village itself – one of the highest non purpose-built villages in Europe.

The high altitude of the ski area means top to bottom skiing is normally possible throughout the season (in many traditional resorts the lower slopes may have little or no snow cover at the start and end of the winter). Val d’Isère receives an average of 4.5 metres (15 feet) of snow each winter and has around 900 snow cannons to top up any failing on mother’s nature part.