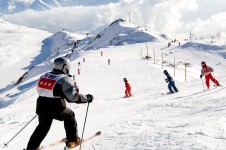 Alpe d’Huez goes big for all levels of skier, and first timers are no exception with two giant ‘beginner parks’ right above the resort.

These wide sunny areas are ideal territory for learning your first turns and thousands of people try it every season, with the dominant Ecole du Ski Francais (ESF) employing more than 400 instructors to teach them all. You should not need to purchase a lift ticket for your first few days as there are free lifts for first timers. 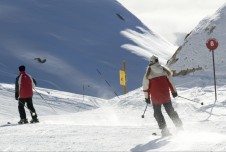 Without doubt one of the planet’s best destinations for intermediate skiers, hundreds of kilometres of ideal piste await, and thanks to the continuous vertical from the top of the lifts at Le Pic Blanc, Alpe d’Huez lays claim to some of the world’s longest ski runs.

Skiers descending all four and clocking up 8,000 vertical metres can validate their performance with a special diploma available from the lift company for one Euro, which is donated to environmental charity, Mountain Riders.

Before you head down the runs do look about though as from the top of the lifts you’re reputed to be able to see a fifth of France, “on a clear day.” The view takes in Mont Blanc, le Mont Ventoux, le Massif Central and extends over the border in to Italy and Switzerland. 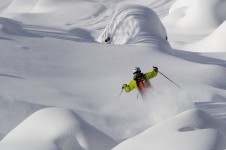 With 16 runs providing 67km of black graded piste, Alpe d’Huez has one of the largest amounts of pisted black runs you’ll find anywhere – indeed more black runs than the total length of all ski runs at many small-medium sized resorts.

The trails include the world’s longest black run, Sarenne, at 16km. Then there’s the off-piste, and the link to legendary La Grave, which simply add Alpe d’Huez to the must-ski list of all serious skiers. 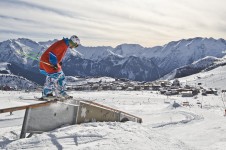 Alpe d’Huez is one of the world’s top resorts for boarders as well as skiers for those who are into their freeriding. There are two terrain parks – one designed for advanced with big features, the other for beginners with less intimidating jumps.

The main park in Alpe d’Huez is now more than 10 years old and is located right up above the main town itself. It does have a few excellent terrain features, however park maintenance is not seen as a huge priority for this resort and as a result the it’s only shaped on occasion and can look a little unkept and unloved. If you are really keen to spend more than a few hours working on your freestyle riding then it might be worth looking at some of the other French resorts with healthier parks.

There is a smaller park that has only just been built that is close to Vaujany where there are some small less intimidating kickers and features for intermediates and beginners to enjoy, not forgetting a boardercross course and a small half pipe. Local girl Isabelle Blanc won gold in the giant slalom on her board at the 2002 Salt Lake Olympic Games. 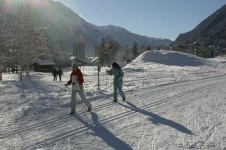 There are 50km of marked cross country trails, divided relatively evenly between easy and intermediate level loops. The Brandes loipe which begins at the Altiport is generally regarded as one of the easiest and the 10km long Poutran loop is also graded blue. For a greater challenge the 20km long 'Loop of the Lakes' is one of the toughest at the resort with a red classification.

Just to make doubly sure there are some 900 snow-making machines covering 1600m vertical metres of the mountain and some 75km of pistes.