One of France’s and the world’s largest ski areas, there are not only hundreds of kilometres of piste on the Alpe d'Huez piste map, linking the mostly purpose-built resort in the Grandes Rousses region to neighbouring traditional villages like Oz-en-Oisans and Vaujany, but also opening up one of the planet’s greatest lift-served verticals with more than 2,300 metres height difference between the top and bottom of the ski lifts. This, in turn, means the Alpe d’Huez can offer several of the world’s longest pistes – up to 16km (10 miles) from top to bottom.

Alpe d’Huez ski resort has a long history since the first road reached here in the 1920s. Poma built their first lift here in the 1930s and ever since the ski area has grown and grown to its current world top 20 dimensions.

The growth of Alpe d’Huez at its base has been remarkable too, with more than 30,000 ski beds available nightly, again one off the largest numbers for any one resort. An upside to the resort size is that there’s a huge choice of shops (if you’re looking for ski hire Alpe d’Huez has a huge choice of shops), restaurants and alternative activities, so if there are non-skiers in your party, they will certainly never get bored.

PowderBeds offer a range of Alpe d'Huez accommodation and also feature a number of ski deals. Choose between apartments if you want to self-cater and need the extra space or our selection of hotels. A great example of the classic ski accommodation PowderBeds have available in Alpe d'Huez is the beautiful Les Chalets de L'Altiport. 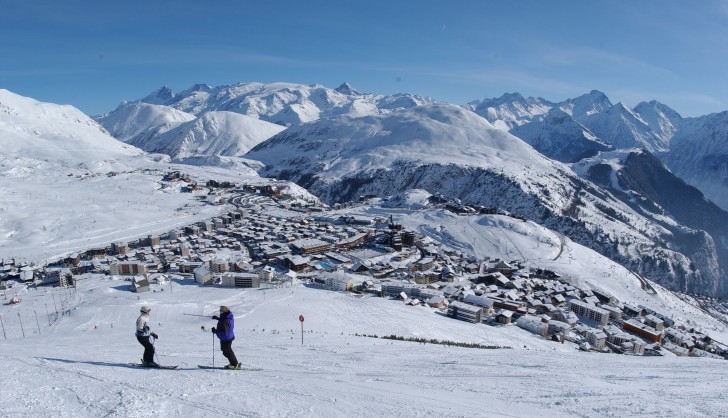