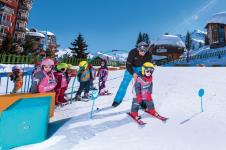 The Village des Enfants is the ski school for children aged 3 years and up and it's located right in the heart of the resort with two distinct areas for different skiing abilities. The Village des Enfants has its own building right by the area where the kids learn to ski and there's a creche/indoor area for when the weather is poor or the kids get tired and need some down time

Avoriaz ski school recently launched what it says is a ‘new concept’ in teaching adults to ski. It had studied the common problems in most resorts – beginner slopes in a busy location at the bottom of the hill, mixed abilities in groups and initially incomprehensible ski equipment requirements – and developed its new improved offer, which it believes is unique in Europe.

What this basically involves is being guided right through the first steps of the learn-to-ski process from arrival in resort, then making your first turns on one of the two specially created separates beginner areas, with special tailored, rapid progress ski tuition. 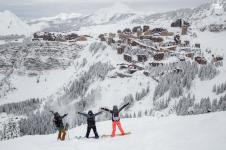 Located in the heart of one of the world’s largest ski regions, it will be difficult for intermediates to get bored in a whole season skiing Avoriaz and its surrounding resorts, let alone a week or two.

More than 200 intermediate runs, each up to 6.7km long, provide an almost unequalled choice and there’s the option of skiing ‘to’ other resorts and back each day, whether over the border to a Swiss resort like Champery or Les Crosets or staying on the French side and heading for Chatel or Les Gets.

If skiing into Switzerland remember to carry your passport, a border check on the piste is rare but you are officially leaving the European Union. Be wary of how many cuckoo clocks you bring back in your rucksack too as duty may be payable! 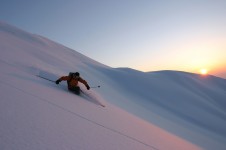 The Portes du Soleil haven’t quite made it ‘up there’ as one of the world’s ‘must ski’ destinations for serious skiers, but perhaps it deserves more serious consideration – with more than 30 black runs to choose from including the World Cup Downhill which drops from Les Hauts Forts.

Then there is the famed ‘Wall’ run (marked as ‘La Chavanette’) on piste maps, one of world’s steepest and widest black runs sometimes jokingly and tastelessly described as a ‘brown run’ because of the possible effect on your trousers. It is one of those you peer over hoping to see the slope below, but you may be disappointed if the usual large moguls that cover the run obscure your view. The difficulty of the descent is usually determined by the size and iciness of these big bumps.

Avoriaz off piste too, may be underrated. The Ecole du Ski Francais (ESF) recently launched a ski safari programme for advanced skiers which takes groups of up to four to explore up to 50 of the best off piste routes around the Portes du Soleil.

One of the world’s leading freestyle centres, Avoriaz has three snow parks and a world-class superpipe. It's also home to a new generation of snow parks, the Burton sponsored ‘Stash,’ which incorporates 80 all natural, largely wood based modules.

With more than half of the lifts high-capacity, high-speed chairs and gondolas it's easy to get around and there are good areas for beginner and intermediate boarders too, as well as plenty of powder for freeriding. 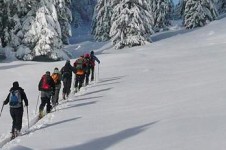 Although not well known for its cross-country skiing, Avoriaz has seven loops to choose from with a total of 23km of trails, which roughly divide in to a third each of easy, moderate and difficult. The well marked trails cross the plateau where Avoriaz sits and wind through the surrounding pine forests providing great views of the surrounding mountains.

Being one of the highest resorts in the Alps at 1800m, season long snow cover is almost never a problem at Avoriaz. However about half of its skiable vertical is actually below resort height so these are more likely to be subject to snow cover issues than those above.

But as the ski area is so vast, even if lower slopes do suffer at the ends of the season, there is always plenty of terrain open above the resort. About 15km of runs have snowmaking cover.