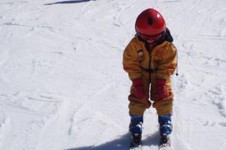 It’s perfectly possible to learn to ski in Chamonix, but most beginners will find the experience more relaxed and more affordable at a smaller, less famous resort.

There are beginner areas by the town itself but they can be low for snow surety and they’re also over-shadowed for much of the day by the steep valley above. On the other hand, for a first winter sports holiday, Chamonix has the wow factor of Mont Blanc and great sports and leisure facilities to enjoy if learning to ski or board is only a minor part of what you want to experience. 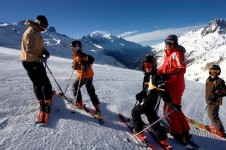 Chamonix does not offer many of the long piste motorways of most of France’s other famous resorts because its skiing is divided in to several small-medium sized sectors, of which Le Brevent, reached by a gondola from the edge of town, is the most convenient. There’s a good mix of blues and reds on the sunny slopes here and at neighbouring Le Flegere, both directly across from Mont Blanc.

Moving further from Chamonix itself and in to the wider valley you’ll find largely gentle runs above the village of Le Tour on the slopes of Balme, with the neighbouring Grand Montets glacier above Argentiere offering steeper and longer runs (up to eight kilometres/ five miles in length), including some of the area’s highest and most snowsure at up to 3275m.

There’s more skiing at Les Houches back down the valley but you’ll need your own transport or to take the ski bus to reach these, and make sure your ski pass covers them all. Several options are available with different areas included in each, so be careful if you’re planning to ski multiple sectors.

More confident intermediates will be capable of skiing the famous Vallee Blanche, an (up to) 24km (15 mile) off piste route through awe-inspiring glacial scenery that departs from the top of the Aiguille du Midi. The challenge on the largely gently sloping glacier run (most of which would be graded green if pisted) is mainly holding your nerve on the ridge walk from the cable car station to the top of the slope if conditions aren’t great. As is climbing the 311 steps back out of the valley at the end when your legs are screaming. Most of the occasional deaths that occur among the thousands who make the run each year are from falls in to glacial crevasses, so going with a guide is essential. 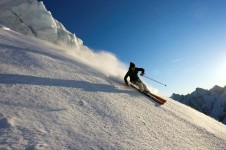 One of the world’s true ‘must ski’ resorts for advanced and expert skiers, much of Chamonix’s appeal lies in its vast range of off piste opportunities, with some of the world’s biggest lift-served verticals awaiting via dozens of access points up and down the full Chamonix Valley.

Although not highly recommended for first-timer skiers, Chamonix is highly recommended for first time off piste skiers, because there’s the full range of off piste routes from short hops in to the trees at one of the smaller ski sectors like Balme above Le tour, through long routes by the Grands Montets glacier above neighbouring Argentiere to the full Vallee Blanche. 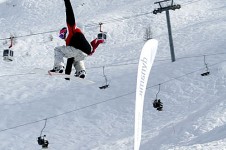 As it is for skiing, snowboarding Chamonix has the history and scope to make it an essential stop for experienced boarders, but is less highly recommended for the novice. The first snowboard descent in Europe reportedly happened here in 1981 and good free riding boarders come to Chamonix to enjoy the advanced off piste terrain and huge vertical descents possible here.

For the less hardcore Chamonix has had less to offer but the terrain park at Grands Montets above Argentiere has been improving year-on-year and most of the easier terrain at Le Brevent can be accessed by cable cars or chairlift. Boarding the Vallee Blanche is popular but can be hard going if conditions aren’t perfect with much of the 24km pretty flat and not fun if icy. Your guide should be able to take you on a steeper, more boarder friendly variant on request. 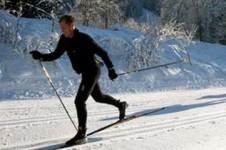 Chamonix’s cross country ski network might perhaps be better known if its Alpine sports were not so dominant. There’s a decent network of more than 40km of trails along the valley floor and, as with its downhill slopes, about half of these are more challenging than the norm.

The low altitude of some of the routes can be a problem outside mid-winter but most are through shady areas protected from the thawing effect of the sun.

Chamonix’s great altitude range and numerous ski areas at different heights and orientations means that it can often offer a variety of snow conditions all at the same time, depending on which ski area you opt for.

So the Chamonix snow forecast is almost always good one way or another. However the town itself is quite low by modern standards so, while upper slopes thousands of metres above often have some of the deepest snow in France and remain open in to May, snow at resort level is more problematic.