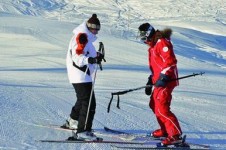 A recommended resort for beginners because of the convenience of the wide nursery slope area right next to the resort, then the option to move smoothly on to slightly longer/steeper runs a little further up the slopes, and the fact that the whole experience is more affordable that at many of the larger, better known resorts of the Alps. The locals are generally friendlier and more relaxed too. 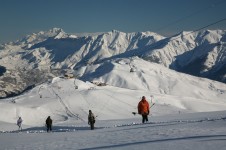 Intermediates have the most to gain from a stay in La Toussuire as virtually all of the runs in the huge network are graded easy or intermediate (only 5% black), including all the crucial inter-resort links, so you can wake each morning and decide which neighbouring ski resort you plan to ski over to each day of the week.

Most of the 100 plus runs are mid-length fast cruisers, the longest is a 3km red over 910 vertical metres from Le Grand Truc (2210m) above the resort down to Les Bottieres (1300m) below.

Although this is a very extensive ski area, steep terrain is limited with half-a-dozen black in the entire network, so most of the challenges for advanced skiers are to be found off piste with a mountain guide. The toughest run in the region is the 1.5km long Vallee Perdue, usually unpisted, which descends from Tete de Ballard above the resort down the valley between the resort and neighbouring le Corbier. 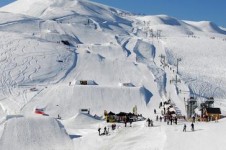 The resort’s freestyle facilities include a terrain park and a boarder cross course, accessed by the Chamois lift. The park contains 20 elements which are graded at the usual three levels of difficulty with eight blue and six each red or black.

The wide bowl above the resort provides a great expanse of terrain to enjoy, but as it is largely pisted, there isn’t much freeride terrain which is likely to have much powder cover. Also beware that although La Toussuire itself is well equipped with half-a-dozen high speed quads and six-seat chair, further afield in Les Sybelles you are more likely to hit drag lifts. 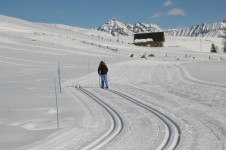 There are 30km of largely easy cross country trails marked which circulate around the base of the giant bowl above the resort and make a more direct link than the Alpine pistes and lifts over to Le Corbier, through fields besides the road. On the one hand the altitude means snow cover is generally good all season long, on the other a lack of many trees mean the terrain is a little samey.

With La Toussuire sitting at 1750m and the region’s highest lifts stretching up to 2,620m and snow making cover on the most important 20% of the ski terrain, average snow conditions are generally good. Even the links to the neighbouring ski areas in the Sybelles network are at high altitude, unlike in many other multi-resort passes where low level links are a weak point as they lose snow cover first.