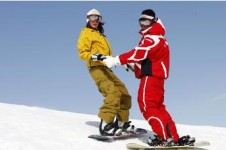 The resort is a good choice for beginners and got better still recently with the creation of a new beginners' ski area at the summit of the Prarion lift on the Prarion plateau. This has a new easy-to-ride ‘Ecole' (school) chair serving it, as well as a carpet conveyor lift.

The relaxed atmosphere of the village and the high quality teaching of the local ski school are both factors in making a happy first experience on skis. There’s lots of easy green and blue runs to progress on to once you feel confident to leave the nursery slopes.

And to make learning-to-ski more affordable Les Houches created a special new beginners lift pass in the 2009/10 season, which gives access to the Bellevue cable car, the Mont-Blanc button lift, the Prarion bubble lift and the ski school lift, as well as the carpet conveyor lift. 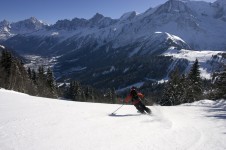 Intermediate skiers have the best of both worlds with the Chamonix Valley’s largest single ski area above the resort and classic areas like the high altitude Grands Montets ski area above Argentiere and Balme and La Flegere above Chamonix. Nearly all of the 55km of local slopes are easy or intermediate standard and this should prove more than enough for a week for those in their second or third week on the slopes.

You can also enjoy wonderful 360 degree views of the Mont Blanc massif from the top. More advanced intermediates will want the full Valley pass (Mont Blanc unlimited) which increases the terrain available tenfold. They should also be up to tackling the World Cup downhill run, if not at competition speed. 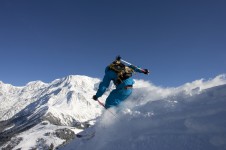 Les Houches has both steep skiing on its local slopes and easy access to all the world famous terrain that the Chamonix Valley has to offer.

Although there are only two black runs at Les Houches itself and only 5% of the slopes are rated expert, those four trails do include one of the world’s most famous runs, the three kilometre (two mile) long Verte piste which is one of the handful of ‘classic’ downhill runs on the World Cup circuit (when they say world cup from Chamonix, they really mean Les Houches!).

The technical sections on the course include La Cassure, the “S” at Pessi, the Eriksen bosse and the Goulet – tricky enough at regular speed. Along with “La face de Bellevarde” in Val d’Isere, it is one of only two FIS officially recognised downhill runs on the men’s World Cup circuit in France. Former world cup racer and now ski instructor Marc Battendier offers a ‘guided visit’ of the Verte to good skiers. 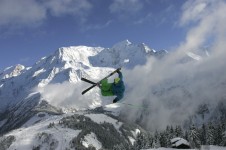 Les Houches has a small terrain park with jumps and features that will best suit beginner and intermediate level riders. Most of the lifts on the mountain are drags, but much of the terrain can be accessed by chair lift or gondola or cable car.

There is also a huge amount of freeriding and more terrain parks in the wider Chamonix Valley. For a little different experience in learning boarding or improving your existing technique, the Ecorider School offers lessons, with respect for the environment. 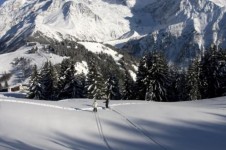 Les Houches has some of the best cross country terrain in the whole Chamonix Valley with 7.5km of trails situated at a snowsure altitude at the top of the Prarion lift, and more down at Les Chavants. There are two routes here that cross snow fields and passages through forest. There’s a cut off route back, "the return route of the tired." If the snow cover allows, you can ski over to Col de Voza.

There’s also two or three runs at neighbouring Servoz too when snow cover is adequate. In the wider Chamonix Valley there are 43km of runs, many of them up between Chamonix and Argentiere and rather prone to snow shortages at the start and end of the season because they’re down close to the valley floor. There are seven runs in total, two easy greens, three more difficult blues and two intermediate level reds.

Les Houches is not especially high and its ski lifts reach 1860m, but the slopes are north facing and there is extensive snow making which normally ensures key runs are covered for most of the season.

The shade provided by Mont Blanc also helps maintain snow conditions as well as encouraging abundant snow to fall in the first place. Of course other Chamonix valley ski areas included in the Mont Blanc Unlimited pass are extremely snowsure reaching 3275 on Les Grand Montets and with glaciers beneath the snow, so you can be sure there’ll be skiing nearby and on your lift pass, even if you are unlucky enough to arrive when conditions at Les Houches aren’t good.

However the opposite is usually true with skiers from Chamonix coming to Les Houches in bad weather to enjoy skiing on its more protected tree-lined slopes.