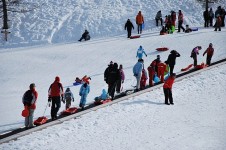 Montgenèvre recently spent more than three million Euros developing a new area especially for beginners on a 50 hectare area right next to the resort, the ‘Front de neige.’ This safe space is served by the recently extended La Butte conveyor lift and a free ski-lift (La Durance). In addition old lifts at Les Chalmettes were replaced by a Telemix lift which is very easy to use, so that novice skiers could easily reach the Gondrans sector which is especially well suited to the early days of skiing. The same process was carried out with the dismantling of old drag lifts at Mini-Chenaillet, Chenaillet and Barral in order to encourage beginners to use the Telemix (hybrid lift). The resort even purchased three new snow grooming tractors to ensure the snow surface was ultra-smooth. 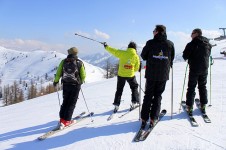 Intermediates will love the Milky Way (“Vialattea”) circuit and the chance to travel in to Italy and visit the host resorts of the 2006 Winter Olympics including Sestrière – the country’s first purpose built resort that packs one of the world’s biggest snow making arsenals - Sauze d’Oulx and the Olympic biathlon centre of Sansicario. Years ago there used to be a border post on the piste between Montgenèvre and its Italian neighbour Clavière a few kilometres away by road and it was important to carry your passport, as well as needing some Italian Lire if you wanted to buy lunch, but with the increasing strength of the European union and the introduction of the Euro, it’s now seamless (although probably still wise to carry your passport and E111 health card just in case!). There are added bonuses for holders of a Milky Way pass valid for six days or more. Firstly it entitles you to ski in other major French resorts too, including Alpe d’Huez, Les 2 Alpes, Serre Chevalier, Puy Saint Vincent and also back in Italy the 2006 Olympic snowboarding centre of Bardonecchia (You’ll be able to do this most easily with your own transport), Also if you arrive early in Montgenèvre at the start of your holiday you can use the bonus of four free hours skiing or boarding on the day of your arrival, before its six day validity officially begins. Of course you don’t have to ski in to Italy at all, a local Montgenèvre only pass covers about 100km of trails around the resort with lots of exciting intermediate-friendly terrain in the ‘Mountains of the Moon’ area. Le Pharo, a blue run, is the longest piste in the area at 5.5km (3.5 miles). 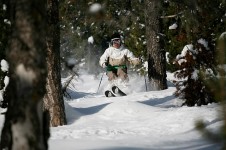 Plenty of challenges locally both on and off piste for skiers in Montgenèvre where the Rocher de l'Aigle terrain is generally regarded as the toughest of the 18 black pistes that make up 10 per cent of the resort’s slopes. Beyond these local runs though there’s much more potential in the wider area.

The ski school or mountain guides will be happy to take you to the numerous off piste runs from the nearest in Les Bois des Brousset or Le Tremplin to the fantastic bends of Les Mamelons, to the gentle 1000-metre descent to Cervières via Les Gondrans. Other classics off piste itineraries include the Doire and the La Vachette valleys or there are the highly technical gullies of Le Janus for the most proficient.

With the Milky Way pass there are always challenges to be found in the vast area extending in to Italy including the 2006 Olympic downhill ski courses or indeed at other French villages included in the six-day ticket, such as Les 2 Alpes with its proximity to legendary freeride resort, La Grave.

Although heliskiing is banned by law in France, Montgenèvre’s location next to the Italian border, means the resort’s more well-heeled guests can make use of one of the two helicopters based in nearby Sauze d’Oulx to try freeride skiing with a guide on summits over 3,000 metres high in Italy including Dormillouse, Terra Nera and Clausi. First descents cost about 1000 Euros for up to four people, second and subsequent descents about half that. 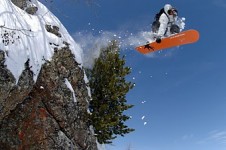 Montgenèvre’s recent improvements have made it ever better for boarders. The natural terrain in sectors like the Mountains of the Moon are wonderful freeriding terrain for bouncing through the powder, and now the village’s equally good freestyle facilities have been made more accessible too with the removal of old drag lifts and their replacement by conveyor lifts, chairlifts and gondolas. Facilities include a good terrain park, international standard half pipe designed with the help of experts from the French national snowboarding association, and two fun runs. Back to the freeriding, the village also has a dedicated freeride zone in Les Gondrans sector for extra unpisted but safer fun in the powder without needing a guide or an avalanche transceiver. 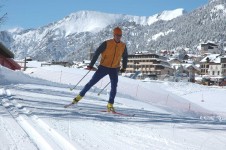 Montgenèvre’s altitude helps to make it a good choice for cross country skiers looking for some certainty of snow cover, especially early and late in the season. The resort has three sectors offering cross-country tracks for both classic and skating styles with runs of various levels of difficulty through woodland and across the wide open spaces above the treeline.

Locally there are 17km of trails although these are the proverbial ‘tip of the iceberg’ in terms of the full terrain accessible in the area, which has the highest four star rating for its Nordic facilities.

Some of the easiest tracks are in the Bois de Sestrières sector with trails through larch woodland leading to a viewpoint over to La Vachette and the ancient medieval town of Briançon – part of the Serre Chevalier ski area. There are red and black graded versions of this route too for those seeking more of a challenge.

A second route, Les Lacs, follows the Italian border and crosses over to neighbouring Clavière before returning via Le Tremplin, with some bridges over the downhill pistes that are crossed en route. Again there are trails for all ability levels here.

The third option is for the most dedicated cross-country skier as it’s a favourite of the French national team who arrive each year with about 300 pairs of skis for training. The Les Alberts/Val des Prés area has 60 kilometres of easy trails following the Clarée river.

It doesn’t end there either if you’re really serious about your cross country skiing, as the Nordic facilities from the 2006 Olympics are just a few kilometres away over the border and the Haute Trace des Escartons route, a 100km long Franco-Italian trail that links Saint Véran to Névache in a four days excursion via the Col d’Izoard (2,360m) and the Col de Bousson (2,200m), passes through Montgenèvre between the third and fourth stages.

Located up above 1800m, Montgenèvre is one of the highest ski resorts in the Alps, remarkable considering it is a traditional village rather than a purpose built centre – even most purpose built villages aren’t so high. The altitude is good news for snow cover, especially as the north-facing slopes rise more than 800 metres above too, even though it receives 300 sunny days each year. So it is that the village can claim to offer a longer ski season than any other resort in France that does not have a glacier – from early December to the end of April each season. Over half of the local terrain is covered by snow making equipment, in case mother nature fails to deliver. It’s more likely the machinery will work at Montgenèvre’s height too rather than at ski areas half as high which are less likely to be cold enough for the machinery to be able to operate.