When you take your Peisey-Vallandry ski holiday you’ll discover the resort is made up of five traditional villages that were largely over looked by British travel companies until the construction of the remarkable Vanoise Express double decker cable car a few years ago, fulfilling a long held dream of two giant French purpose-built ski areas of the 1960s, La Plagne and Les Arcs, to connect their two ski areas.

The resulting giant area, Paradiski, is one of the world’s three biggest ski areas by some measures (around 10,000 hectares of terrain and more than 400km of piste) and Peisey-Vallandry is at the heart of it. So it was that when the Vanoise Express opened, carrying up to 200 passengers at a time suspended up 380 metres above the valley floor, there were a spate of chalets built by the lift at Peisey-Vallandry, many of them snapped up by British travel companies.

However while on the one hand Peisey Vallandry is superbly located in the heart of this vast ski area, if anything the village(s) has gone the other way and has sought to highlight its traditional roots instead. Rather than try to be just another part of the giant ski domain that surrounds it, the resort instead stresses its location at the entrance to the Vanoise National Park. It has the area’s best Nordic facilities, including cross country trails and an excellent biathlon centre where the French national team train (biathlon involves cross country skiing with a rifle on your back, stopping every few kilometres to try to hit five walnut sized distant targets with your rifle. The trick is to ski fast enough to win the race, but be relaxed enough when you reach the range top hit all five targets – not easy when skiing hard means you may not be able to keep the gun straight)

Choosing which part of the resort you stay in will have an effect on the convenience of your stay. Time to concentrate. It is the two small mountain enclaves of Plan Peisey and Vallandry that are the most convenient, these have been largely purpose built next to the Vanoise Express. The traditional village of Peisey Nancroix, once just Peisey but now named with its neighbour, at 1100m below isn’t much less convenient as it's linked by a gentle walk-in cabriolet gondola which again connects with the famous cable car. Then there’s the old village of Nancroix a few kilometres away (and the non-lift linked half of half of Peisey Nancroix). Finally there’s Landry at the base of the resort and not linked to any other.

Despite now being the minnow caught between two whoppers, Peisey Vallandry can claim a longer history of snow sports. There was skiing here 20 years before the neighbouring resorts were built. 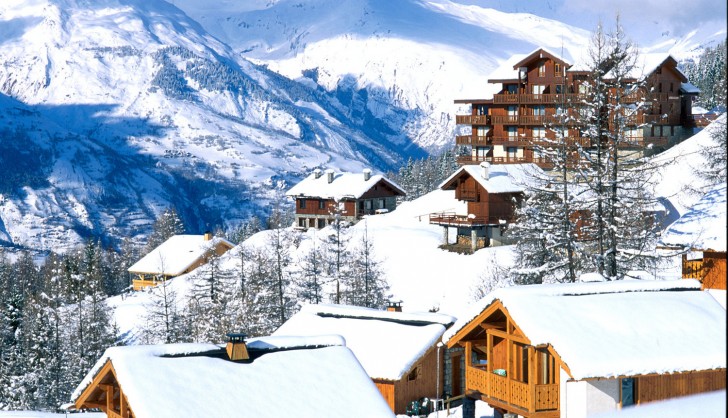