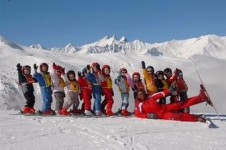 With more than 20 novice runs and almost half of the entire ski area terrain rated easy, Valmeinier has the ski slopes that make it easy to have a fulfilling first week on the snow. The upper resort’s purpose-built design will, like other ski areas made just for skiing, always make it a less hassle-free place to get around too, compared to a traditional village. The ski school has offices and special beginner slopes at all three levels of the resort; at the Agorespace (play area) in Valmeinier 1500, in front of the Jeux chairlift Valmeinier 1800 and at their own ski school meeting point in Valmeinier 1900. 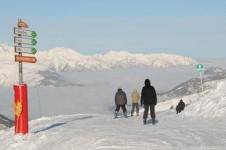 Intermediate skiers will find plenty to entertain them during their stay in Valmeinier with nearly 100 miles of runs on your doorstep including more than 75 trails rated easy to intermediate, the longest 12km long. That’s a lot of skiing and the resort provides several ‘itineraries’ you can follow to find the best routes around the region, heading over to Valloire and then back again by the best runs. Trails include wide, fast ‘motorways’ above the treeline and more challenging technical courses through the trees, and most other types of ski run! Added attractions include an avalanche transceiver test area where you can test equipment, and night skiing in peak holiday periods, so that you can fit in yet more slope time. 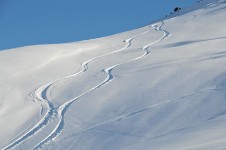 Although it does not have an international reputation as a destination for expert skiers, those with a little imagination will find plenty to entertain on and off piste in the large area. The nine black trails in the region include the Cascade, Les Grandes Drozes and Olympique pistes, and runs like JMB en route over to Valloire, there’s also an impressive mogul field above Valmeinier 1500.
Freeriding is also huge in the area, with lots of routes to tackle with a guide on the Gros Crey and Crey du Quart massifs, with descents down from 2600m. Ski touring trips are possible to the nearby resort of Les Karellis, an hour away, or to the more distant Three Valleys, via the village and its gondola lift up to Val Thorens. Taking a helicopter flight over the border to Italy, where heliskiing is permitted (unlike in France) is another option. 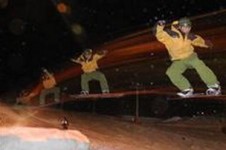 Snowboarding is both popular and well catered for in Valmeinier. The terrain park here has been rated by professional reviewers as among the five best in France and the 15 best in Europe, while freeriders have plenty to entertain them too (see Advanced Skiing). There are even good nursery slopes and specialised tuition for first timers.

The terrain park, located in the Crey du Quart sector and served by the Château Ripaille draglift, is groomed daily by a dedicated park team, and contains an in-ground half pipe and boardercross course, which basically means less snow is needed for it to open, enabling it to get operational earlier in the season and last longer. The park also has several big-air jumps, a hip and various other features which change and evolve throughout the season. 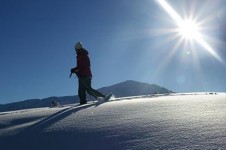 Despite its strong association with Nordic sports, Valmeinier does not have any cross country ski tracks, officially at least, but there are reported to be 10km of trails in the vicinity and more in the nearby Écrins National Park as well as the Vanoise National Park.

Valmeinier has a good snow record, receiving over 2.4 metres (eight feet) of snow annually on average. In addition, the purpose-built part of the resort, at 1800m, is one of the highest French ski centres. A third of the terrain, in other words all the key runs that might need it, have snowmaking cover, provided by a formidable arsenal of more than 400 guns.