Glittering Courchevel is one of the stars of world’s skiing, often appearing in lists of the world’s glitziest destinations.

In fact the resort has five different bases and it is only the highest and largest, Courchevel 1850, that lives up to the luxury image, complete with six five-star hotels, more than any other resort in France (by a long way).

The four smaller, lower altitude Courchevels, known primarily by their altitudes of 1100, 1300, 1550 and 1650 – although the two lowest are actually traditional villages that have always been there, St Bon at 1100 and Le Praz at 1300, which was the site for many Nordic events at the Albertville 1992 Winter Olympics.

A Courchevel 1850 ski holiday is what most people mean when they talk about Courchevel as a single entity. It is a full service, world class resort with lots of Courchevel accommodation and great facilities as well as plenty for the less well heeled. One of the earliest purpose-built French resorts, dating back to just after the war in 1946, it is not the most attractive of resorts, although there has been a major investment in architectural beautification in recent years. It’s here that the celebs head to and here that Russian oligarchs, including most famously the owner of Chelsea FC, have purchased property, indeed some long standing guests moan that it is not as French as it used to be. Today 60 per cent of guests come from overseas, and the resort has counted arrivals from 45 different countries – a truly international mix

PowderBeds offer Courchevel hotels in Courchevel 1850 and 1550 as well as a wider choice of Courchevel apartments which offer the extra space and flexibility as well as great value.

All of the bases, except St Bon, have direct lift access to the world’s largest fully-lift-linked ski area, the Three Valleys, of which Courchevel’s Valley is the most westerly and the largest of the three, bordering Meribel to its East with St Martin de Belleville, Les Menuires and Val Thorens another valley after that. Courchevel has some of the best terrain in the entire huge area, a key part of its long term success, with something for all ability levels. 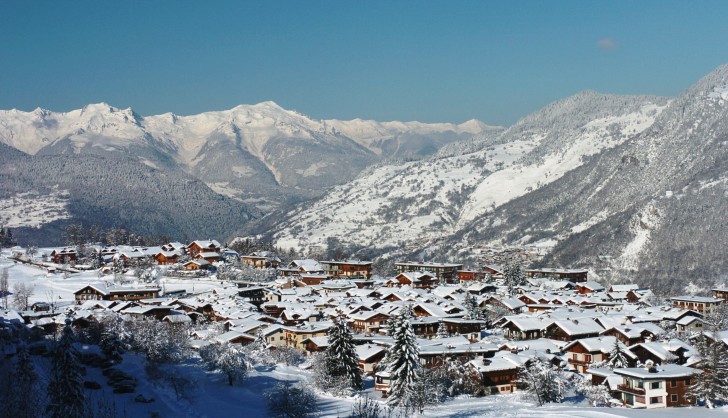