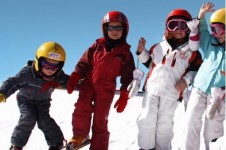 Courchevel has over 1,000 ski instructors employed at peak periods and competition between the ski schools helps to keep standards high. There are two British run ski schoolds here – New Generation and Supreme but by far the largest school is the ESF (Ecole du Ski Francais) which operates on a series of nursery slopes at 1850 and on small slopes at resort level at the lower Courchevel resorts so long as snow cover is good enough.

Because of the size of the resort and the number of guests it has milling around each morning it is worth double checking exactly where you are in a relation to the nursery area where you make your booking, as a long walk or a bus ride may be involved in some cases.

Once you’ve mastered the basics of turning and stopping Courchevel has excellent runs for progression with the easy-to-ride Jardin Alpin and Verdons gondolas taking up to the top of long, well groomed easy, wide green runs back to the resort. 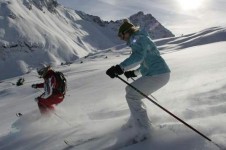 The Three Valleys is generally regarded as the best ski area in the world for regular recreational skiers, thanks to its hundreds of miles of blue and red pistes bringing near limitless skiing opportunities of all kinds. There’s also the added benefit of an unrivalled network of high speed chair and gondola lifts to whisk you back up the slopes.

There is of course lots of intermediate skiing in the Courchevel Valley alone, which is already larger the most of the world’s ski areas even without the other two valleys, so you can opt for a slightly cheaper lift ticket if you feel you may be satisfied with the 200km or so of runs locally. 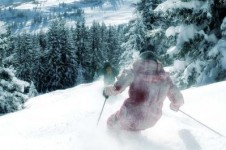 A cult resort for advanced skiers, most famously because of the three couloirs that run down next to the Saulire cable car. Only one of these is officially a piste and they are among the steepest descents in the Alps, and thus anywhere. There’s lots of other steep terrain too, and of all kinds. There’s plenty of tree skiing for example and the Chanrossa area is good for moguls.

But like virtually all of the world’s great ski area, the biggest draw for advanced skiers are the off piste opportunities which are very extensive in the Courchevel Valley, the wider Three Valleys or indeed over the border in Italy with a helicopter lift from the resort (heliskiing is banned in France). But there are off piste routes for anyone from intermediate level who has mastered off piste technique to major challenges only to be tackled by experts. In all cases it's essential to carry safety equipment and to ski with a local guide. 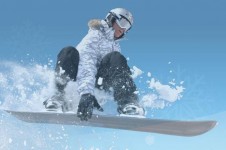 Courchevel has not put the effort and investment in to its terrain parks that neighbouring resorts like Meribel have, perhaps partly because Meribel’s park is easily accessible anyway and part because it is not an area where Courchevel wishes to join in to the ‘best in the Alps’ status battle, feeling its natural attractions are good enough anyway.

As for skiers there’s a huge variety of terrain for all standards, excellent tuition for beginners, and an easy to ride high speed lift network. It would be hard for any ski area to offer more. The ‘mid-size’ terrain park is located at Platret and makes a focus on rails and boxes more than jumps and pipes. 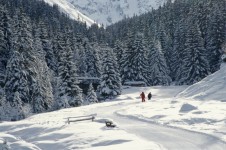 Courchevel has 67 km of cross-country ski trails, which are free to use and all regularly groomed and marked. One off the trails connects to Meribel where there is a further choice of more trails if you don’t want to head straight back, taking the total for the area to 90km.

At Courchevel 1550 there’s a 5km trail with 110m of vertical range,  it starts 150m after the Brigues car-park and winds through the forest, crossing some downhill pistes so be wary of high speed Alpine skiers.

At 1650 there’s a sunny 5km long easy loop in the Belvédère area with 90m of vertical. It starts by the Granges draglift and passes farmhouses at Pralin and by the Avals path.

There are several loops from 1850 including local 2.5 and 5km loops and long 17km and 15km return itineraries to Meribel’s Altiport and La Tania respectively.

Courchevel’s reliable snow conditions have been a key part of its success over the past six decades. The main resort base at 1850 is above the imaginary altitude line somewhere between 1600 and 1800m in the Alps which seems to ensure resort level snow cover from start to end of the season except in those once-in-a-generation warm-dry winters.

The slopes of Courchevel climb over 900m more above that and higher still is the lift-linked glacier at Val Thorens. The Courchevel Valley also has a reputation for some of the best snow in the Three Valleys thanks in part to the northerly orientation of its slopes. And as a final guarantee, Courchevel is one of the long-standing pioneers and proponents of snowmaking in the Alps, operating nearly 700 snow guns covering 25% of its entire terrain.

Staying at the lower bases, particularly down at 1300, makes resort level snow harder to guarantee at the start and end of the season, but gondola lifts from each make it easy to reach the snowline if you’rre visit coincides with one of the rare occasions that your base village falls below it.