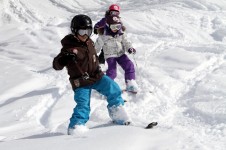 There are good beginners' areas with easy green-rated nursery slopes right next to the village in the Beauregard and Col de la Croix Fry sectors. The ski school has long experience and a generally good reputation and La Clusaz will provide you with a solid start to your skiing career in a real mountain village environment, so you’ll get to appreciate more than just the ski slopes. After your first few days of learning to keep standing and to turn and stop there are good progression green and blue runs in the area to move on to. 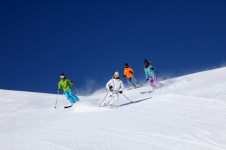 Intermediate skiers have a wide range of more than 80 green, blue and red runs spread across five mountain sectors - Beauregard, La Croix Fry-Manigod-Merdassier, L'Etale, L'Aiguille and Balme. These contain almost all types of ski run imaginable, from classic narrow trails winding down through the woods to open snowy slopes above the treeline and wide fast cruising trails, all inter-connected by a network of more than 50, mostly modern lifts and at the base a ski bus connection. This also runs over to neighbouring Le Grand Bornand every 30 minutes or so for those who hold the Aravis regional pass and wish to ski there too. 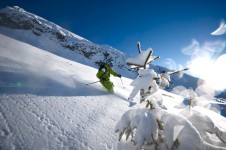 There’s a multitude of different opportunities for advanced and expert skiers above La Clusaz, spread between the five areas. One way to get to know some of it well is to take the summits circuit route which links red and black graded terrain around the ski area.

Favourite sectors include a popular powder bowl in the Balme area, the region’s highest, where the Vraille slope in the same region which drops more than a vertical kilometre while it descends for four in length. Or over in the Aiguille sector the 'Edgar Wall' is the new name for the Crêt du Loup piste, an infamous bumps run renamed after the locally based ski champion Edgar Grospiron. The Combe du Fernuy piste starts black but levels out a little and is downgraded to red as you progress.

There are plenty of legendary off piste routes in the area too, only to be attempted with a ski school group or mountain guide. One favourite ski touring route takes you to La Giettaz, which is now lift-linked to Megeve in the Mont Blanc region close to Chamonix. 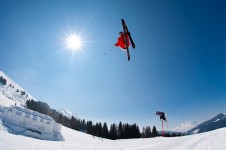 La Clusaz has great freeriding terrain and has always been a pioneer with freestyle too, opening one of Europe’s first terrain parks back in the early years of boarding and following this with pipes and boarder cross courses. Today the main park contains quarter pipes, gaps, tables, fun boxes and whoops and there’s also a 100m international standard half pipe. 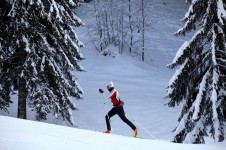 Cross country skiing is a major part of winter sports at La Clusaz and mostly takes place on the Plateau des Confins (1420 – 1650m)(Espace des Confins, 4777 route des Confins; +33 (0) 4 50 02 47 43; http://www.laclusaz-nordic.com) which was the site of the 2006 Nordic World Cup and is one of the few cross country ski areas where the tracks have snowmaking cover. The facility can be reached by shuttle bus.

There are 50km of trails here for all ability levels including a 7km connection to neighbouring Le Grand-Bornand. A centre on site has a cross country ski school office and there are also equipment rentals and the chance to try laser biathlon (biathlon is an exciting to watch, and exhausting to do, sport which involves cross country skiing then shooting at targets, with the laser gun you avoid the need for a conventional rifle). A small trail access fee is payable daily to use the tracks.

A second slightly smaller cross country ski area is located on the Beauregard plateau where there are eight cross-country trails, covering 36km in total, and again suitable for both classic and skating styles. The area can be reached by shuttle bus or by using the Beauregard lift and again all facilities are available on site.

Despite not being one of the highest ski areas in the Alps, nor having particularly extensive snowmaking equipment, La Clusaz normally has quite reliable snow cover down to resort level.  The slopes are mostly north and north-west facing and the majority of the area’s terrain is in the upper half of the 1500m vertical range, above 1800m.