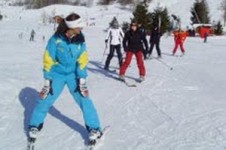 Les Deux Alpes has an interesting proposition for beginners in that not only are their nursery slopes right next to the village for maximum convenience, there are also gentle slopes on the glacier nearly 2,000 vertical metres above. Last season the E.S.F. ski school introduced ‘The Ski Voice’ a network of radios that allows the ski instructor to talk directly with up to six clients at once from a distance of up to 700 metres. 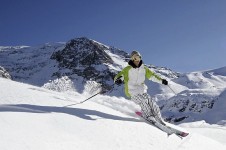 With 135km and of 60 runs intermediate terrain, the longest 13km in length, there’s an awful lot to keep intermediate level skiers entertained in Les Deux Alpes. The ski area is unusual in two ways; firstly, the ski slopes keep climbing further and further away from the resort rather than radiating out around it. Secondly, many of the steeper slopes are directly above the village itself, so you don’t have to go far in the morning to find tougher terrain.

If you wish to take advantage of it (when you’ll already have your time full with les 2 Alpes’ own slopes), the six-day ski pass also gives free access to the "Grande Galaxie" area which includes neighbouring resorts like Alpe d'Huez (for one or two days, linked by a twice weekly bus service) and one day each in Serre Chevalier, Montgenèvre (Milky Way), Puy St Vincent and even Sestrière in Italy – but you’ll need to make your own way to these. 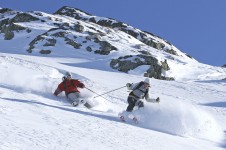 With some 19 black runs covering 43km of the slopes, Les Deux Alpes is again one of the world’s leading destinations for experienced skiers and boarders. The vast off-piste area is a major draw for freeriders with areas like Chalance, la Fée, les Vallons du Diable, les Posettes, Bellecombes, la Selle and many more offering huge verticals across untracked powder (if you arrive after a fresh dump anyway!).

The glacier lifts provide a ski link to the neighbouring ski area of Les Vallons de la Meije, above the legendary ski village of La Grave. La Meije towers at 3982m providing up to 2,150 metres of vertical descent.

Employing a guide (+33 (0)4 76 11 36 29; http://www.guides2alpes.com) to make any of these descents safely is essential and the mountain guides office organise a weekly ‘Free Respect’ programme which advises on the dangers of off piste skiing and safety measures that should be taken before setting out and during your descent. 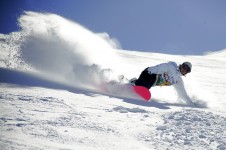 One of the world’s leading snowboard destinations, Les Deux Alpes can claim to be the first ski resort in Europe where boarders were allowed to ride every lift on the slopes, right at the beginning of the sport. Back then they had to carry a little ski too to ensure they could balance. The resort is popular with boarders in summer and winter, again leading Europe with a huge snowboard season opening festival each November.

Activity is centred on the giant 10 hectare snow park which incorporates a beginners’ zone especially for novice freestylers, including a series of small kicks (six moguls), as well as a safe Kids area and the main sector for experts. The park’s pipe is 120 metres long and four metres high.

There is also a slope-style zone with technical modules including hips, gaps and quarters then zones up to 400m long with numerous rails.

It doesn’t end there, because there’s also a fun zone – a kind of mini skate park in the snow - featuring mini modules (wooden logs, picnic table, skate rail ramp) and there are slide zones with still more freestyle attractions including The Ledge with jumps between one a five metres high and The Canyons, a fun course of banked turns and the waterfalls.

If you still need more there are boardercross/skiercross zones, each up to 1,230m long and dropping 185 vertical metres.

Finally there is a giant big air bag, measuring 15 by 11 metres, which offers the chance to land a jump in safety. It’s open every afternoon between 1pm and 6pm; supervised by fully qualified instructors. 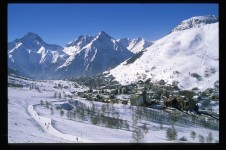 There are 20km of trails at Les Deux Alpes, most of them relatively easy and running above the tree line or down to the traditional village of Venosc below. Trails, including La Molière and Les Perrons, continue through summer pasture land and mountain forest providing lovely views.

Les Deux Alpes is one of the world’s most snowsure destinations, with much of the ski area above 2,000m and skiing right up to the top of the glacier at 3,600m. The permanent snowfield on the glacier is home to one of Europe’s biggest summer ski operations from June to August, covering the top 400m down to 3,200m.

As the ski area on the glacier can be exposed to high winds, the resort stockpiles snow behind fencing and, if cover is ever getting thin, the snow groomers push this snow out over the slopes.