If you think après ski activities for children is limited to the hotel pool or local ice rink, think again. Some ski resorts pull out all the stops to ensure that everyone has the time of their lives both on and off the slopes. For something a bit different to do with the kids once the ski lifts have stopped turning, why not try some of these awesome après ski activities that will have the whole family grinning from ear to ear.

If your kids like sledging and fairground rides, they’ll absolutely love the Alpine Coaster in Chamonix’s Parc des Loisirs (+33 (0)4 50 55 82 18). A cross between a sledge and a rollercoaster, this exhilarating ride has 1300 metres of track that twists and turns through the snow covered trees. Each car can seat two people, and children from age 3 to 7 must ride with an adult.

Fearless teenagers will love the latest attraction in Tignes. Opening in December 2014, the Bun J Ride (+33 (0)4 57 41 68 41) is a cross between ski jumping, bungee jumping and zip wiring. Participants launch themselves off a ramp on skis, snowboard or sledge, and plunge into the 40 metre void below attached to two bungee cords. Once they’ve stopped bouncing, they then slide down a zip wire to the bottom. The ride is located next to the Lac blue run and Merles chairlift, and is suitable for anyone over the age of 13 weighing at least 40kg. 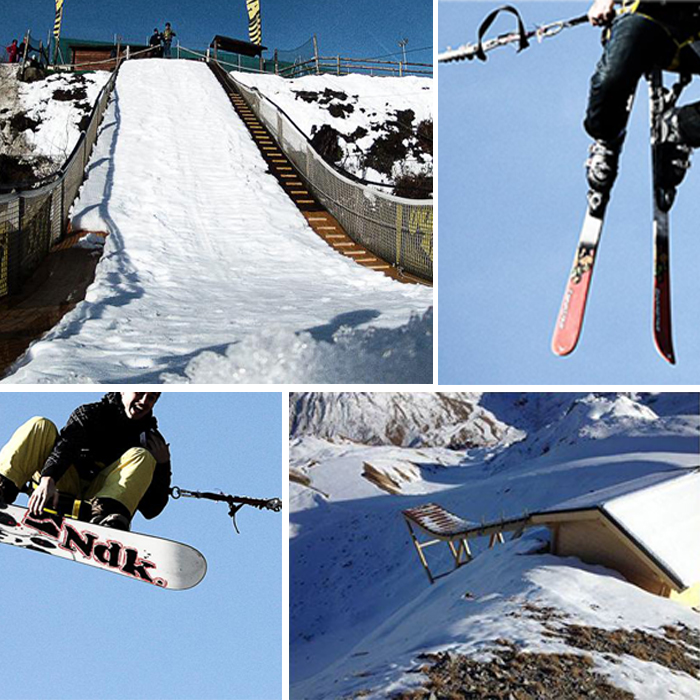 3. Sledging with a twist, Val d’Isère

Sledging gets an exciting twist in Val d’Isère with three fun new variations of the old favourite. Kids as young as four can enjoy ‘Snake Gliss’, where individual sledges are slotted together so that they can slide down in a chain. Kids of six and above can whizz down the slopes head first on an ‘Airboard’, a type of inflatable body board. And slightly older kids of eight and above can try a ‘Yooner’, a sledge on a single ski with a steering bar. Supervised by a resort host, the fun starts at 5.30pm every Monday, Tuesday, Wednesday and Friday on the Savonette nursery slope. (+33 (0)4 79 06 06 60)

If sledging on the nursery slopes is too “bo-ring” for your intrepid youngsters, the Roc ‘n’ Bob toboggan run in Les Menuires should satisfy their need for speed. Kids from the age of seven, and their parents, will love flying down this 4km long track with its 22 bends that range from the wide swooping banks of ‘The Roc Rapids’ to the tighter turns of ‘The Never Ending Canyon’. Open every day, except Saturday, from 2pm to 6.45pm, the run is accessible via the Roc des 3 Marches gondola. Entry includes the gondola ride, sledge, helmet and head torch for when it gets dark. 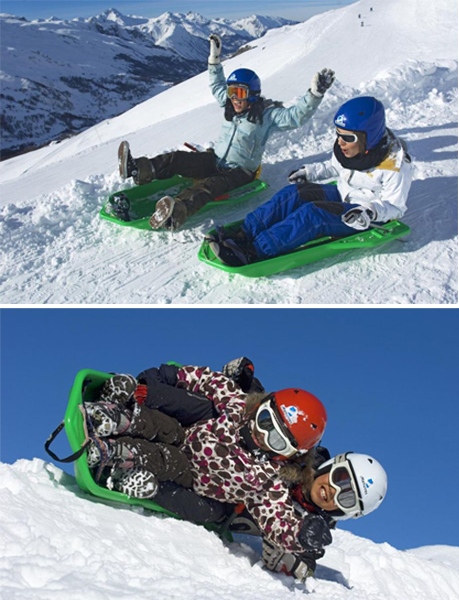 For an unforgettable experience that the whole family will love, why not spend the night in an igloo? La Plagne’s Black Sheep Igloo Village (+33 (0)9 51 38 88 15) can accommodate up to five people in each of its igloos, where you’ll be served a delicious dinner before settling down for the night on your ice bed. In the morning enjoy stunning views of Mont Blanc at sunrise before tucking into breakfast in your igloo. If the idea of sleeping on ice doesn’t appeal, you can simply opt for the dinner package. 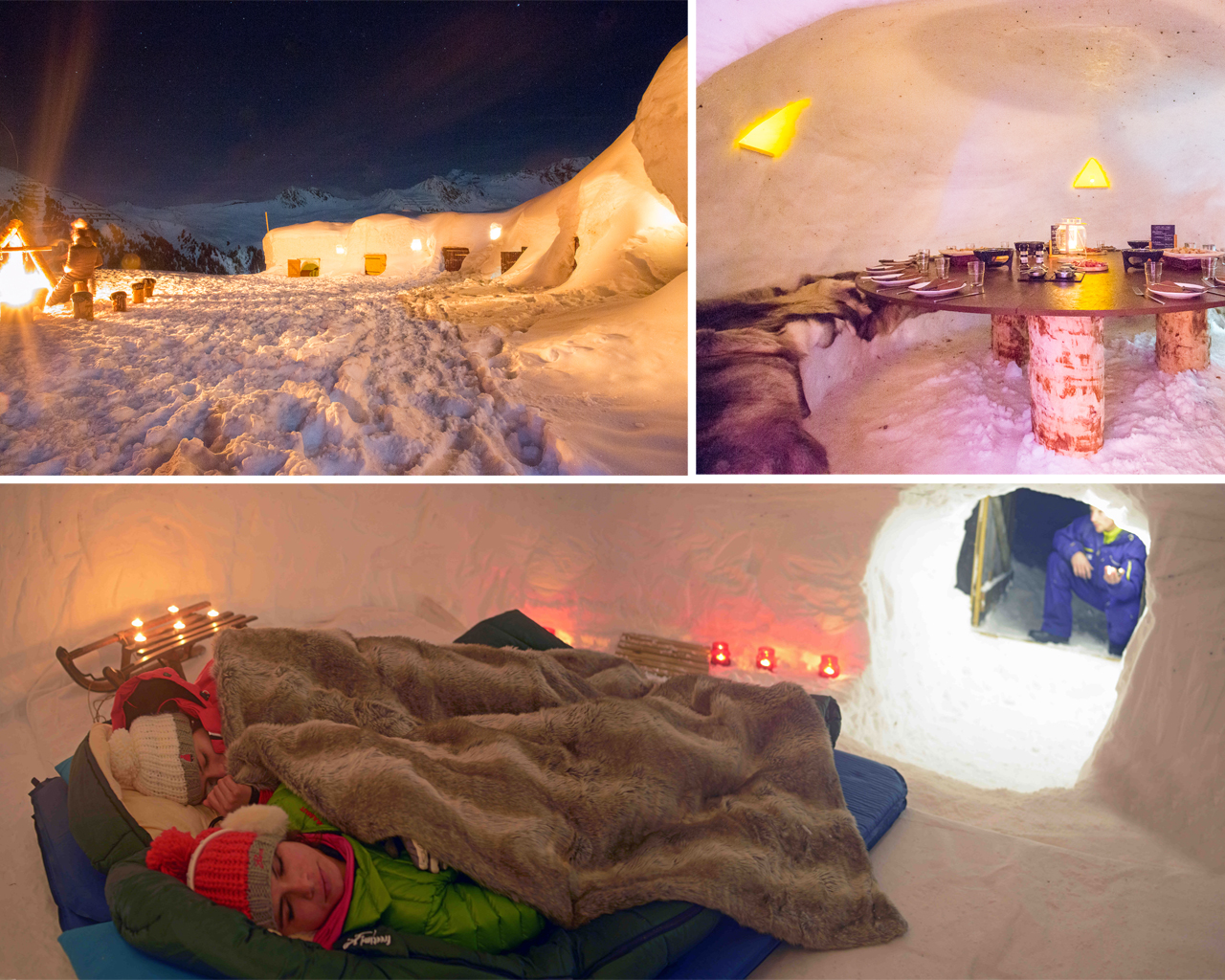 Everyone loves bumper cars at the fairground and in Les Deux Alpes they’ve added an extra dimension to the traditional format by putting them on ice. Every Thursday from 3pm to 7pm you can whizz around the resort’s massive ice rink in the two-seater battery operated cars, sliding around and bumping into whoever gets in your way. Suitable for anyone over the height of 120cms. 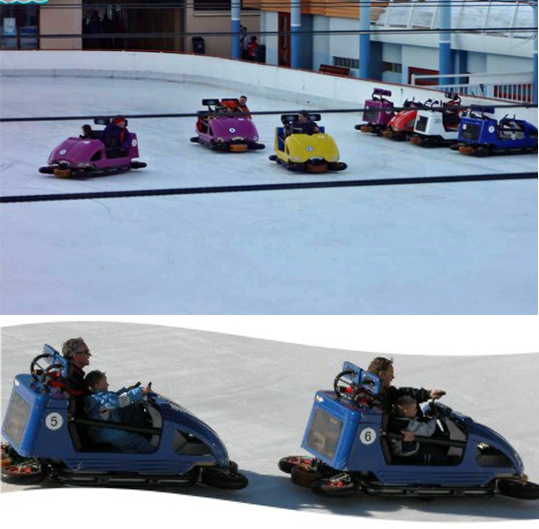 Thrill seeking kids will love flying along the giant 115 metre zip wire in Belle Plagne, which is suspended 25 metres above the Valley Ours. The wire is open from 5.30pm every Tuesday and Thursday throughout the winter and you’ll be provided with harnesses, helmet, gloves and expert supervision for each exhilarating 15 second ride. (+33 (0)4 79 09 11 62) 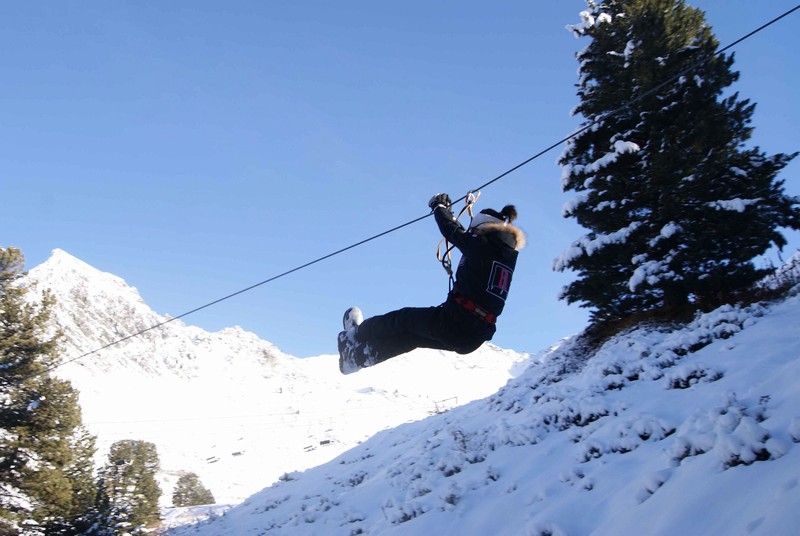 Bad weather days in a ski resort can be a bit of a nightmare with kids, but in Alpe d’Huez it’s never a problem. The huge Palais des Sports is packed full of different activities for kids but best of all has to be the In’vertigo suspended adventure trail. Kids as young as four can climb, swing and tightrope walk freely around this aerial obstacle course which has a massive safety net to catch anyone who falls. (+33 (0)4 76 80 55 74) 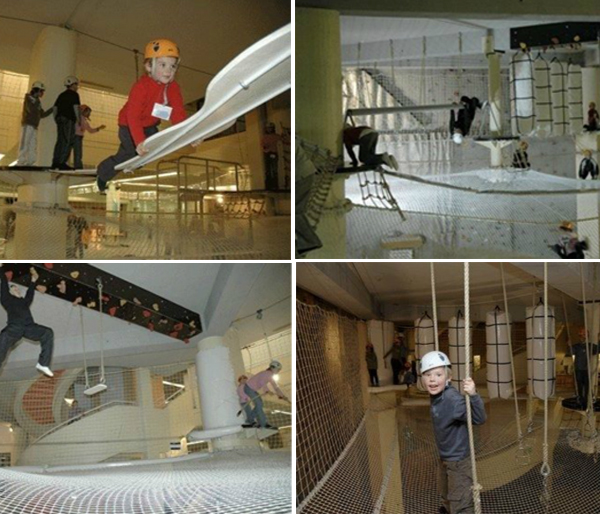 Who needs video games when you can chase your friends round a snow covered maze with real life laser guns?! You can do just that at Alpe d’Huez’s Ice Laser Game (+33 (0)4 58 00 12 18) located just outside the Palais des Sports. Open from 2pm to 8pm daily, it’s a great fun après activity for the whole family.

Everything’s more exciting by night, especially for a kid, and sledging is no exception. Every evening after the rest of Morzine’s lifts have stopped and slopes closed for the day, experienced guides will take you sledging down the dark and deserted Pleney ski run. Sledges and head torches are provided, and although the activity is suitable for kids from the age of 8, under 12s must be accompanied by adult. (+33 (0)4 50 49 48 60) 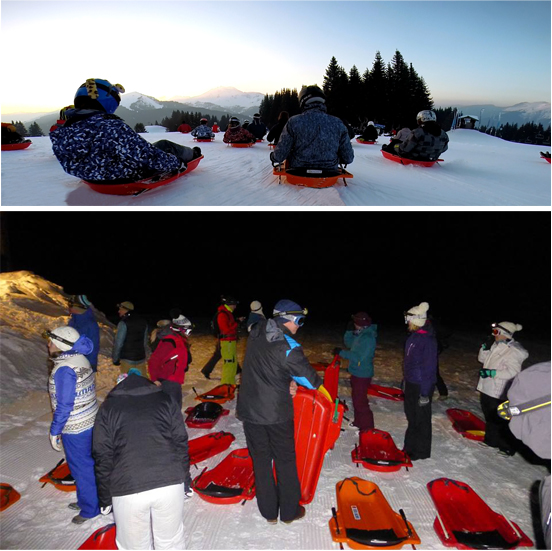 If your teenage kids insist that they’re too old for any of the activities that you suggest and are desperate to indulge in some adult style après, send them along to the teenage disco that’s held at Morzine’s L’Opera nightclub (+33 (0)4 50 79 16 65) every Tuesday night in February and March. Kids from the age of 12 can enjoy a (non-alcoholic) drink and dance the night away from 8.30pm until 11pm.

If you’re planning a ski holiday with children this winter call the PowderBeds team on 0131 240 3300 for some expert advice and recommendations. Or send us a quick email by clicking here